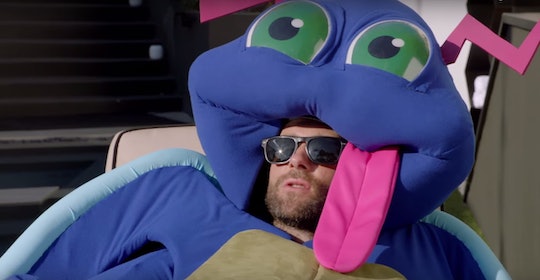 Squirtle, is that you? In Maroon 5's music video for "Don't Wanna Know", Pokémon Go obsession is taken to a whole new level. The new music video is a Pokémon Go parody in which celebrities are the legendary Pokémon. Swarms of kids chase after, and capture, celebrities like Ed Helms and Sarah Silverman. In the video, we see lead singer Adam Levine in a Squirtle suit pining after his ex-girlfriend, played by Silverman. The feel of the video is a lot like Coldplay's "Paradise" where the band members all dressed like elephants. Except the costumes here are no animals, they're hybrids between Yo Gabba Gabba characters and Pokémon.

The video starts with Levine trying a healthy shake and some yoga. He's keeping busy like anyone should after a breakup should, but loses hope when he looks at a photo of his ex. Levine then goes for a joy ride to distract himself. During this little trip we see other band members out and about cosplaying Charizard, Butterfree and Electobuzz.

Levine runs into his pal, Ed Helms, on the street, but can't do anything to help him. The kids look like mindless zombies as they turn their attention to Levine. The poor singer winds up running into his ex, and as soon as it looks like they might reconcile, his ex is captured, and sucked into the mobile device.

Levine sings while holding a bottle of Jack when a man with Richard Simon's hair trespasses on his property, exhibiting how the public invades a celebrity's personal space and time. The Maroon 5 star uses his Poké-powers to easily rid of the intruder.

The video then pauses as Maroon 5 is performing. Their director yells cut because he wants Levine to wear a cowboy hat, saying it will be sexy. Gritting his teeth, Levine hesitantly forces out the words "I, I don't know man, I don't know if I want to be like silly... it kind of goes against brand... and just my public image."

Later we see the heartbroken Squirtle man slip further down a slippery slope partying, and waking up with empty bottles of alcohol, a bong, and two naked women in his bed. He checks on his phone to see if he got any texts from his ex. He hasn't, and when he heads out of the room the party is still going on. Levine winds up bumping into his ex one last time, and is immediately shut down. Aren't exes the best?

Make sure to catch Vince Vaughn at the end. The Internship actor sits with Levine at a bar complaining about constantly being chased by fans, and how hot it is in their suits. The video ends with them running from screaming fans we hear off-screen. The fans gotta catch em all, after all.