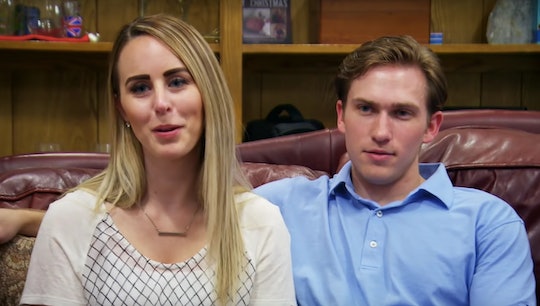 If you've ever heard the phrase "love at first sight" and believed it to be true about your own relationship or about finding your life partner in general, Lifetime has a new series for you. In a new show, the network is exploring what it would mean if people not only fell in love when they first met... but got married, too. All in all, the outcomes are a mixed bag, but this is one love story that seems to be for the books: Married at First Sight's Danielle Bergman and Bobby Dodd have a baby on the way.

The couple announced the news with a sweet photo on Tuesday. In the image, Bergman and Dodd are seen holding a frame that reads: "Love the little things," and alongside it is a sonogram of their baby-to-be. "Bobby and I are overjoyed to be expanding our family! This is our every dream come true," Bergman shared in a statement.

The couple, who met and married on the seventh season of the show, seem overjoyed to be expanding their family, as Us Weekly reported. However, as for what's going to happen after the baby is delivered... well, that's up for debate.

There are tons of logistical questions that come with marrying someone upon first meeting them. Chief among them, most likely, are whether or not you're aligned on some of life's most important morals and values. It seems that there may be a bit of a question as to what happens after Bergman delivers the baby, as Dodd has previously expressed that he would very much prefer his wife to stay at home with his children.

"I think it could be healthy for the kid, but ultimately, whatever Danielle is happy with being, whatever is best for our family, and for Danielle and I and our child, is what it's going to be," Realitytvworld.com reported Dodd shared on a follow-up episode to the show called Married at First Sight: Unfiltered. However, as Bergman protested, he continued:

However, after being pressed about it, Dodd did also express that his view is not so much an archaic gender role as it is a matter of practicality. "A lot of women have careers and a lot of women have more wealthy careers than men these days," he continued on the episode, according to Realitytvworld.com. "Danielle makes more money than I do, and I'm not shy to say that. So when she sacrifices her job when we have kids, when that day comes — if she does — we'll be taking a pay cut."

Prior to being a contestant on the show, Lifetime reported that Bergman was an account executive living in Dallas, Texas. According to the network's site, Bergman backpacked through Europe after college, and was eager to finally settle down with the right partner, all in all "ready to hand over her fate to the experts."

Dodd, on the other hand, grew up in a small town just outside of Dallas, is a construction manager and homeowner who cites the purchase of his property and becoming an uncle as the catalyst to wanting to seriously start looking for his own life partner, according to Lifetime. He attributes his old fashioned outlook on love to his parent's successful 34 year long marriage, according to Lifetime, and says their commitment "encouraged [him] to be romantic, chivalrous and always strive to make his partner happy."

It seems that the two may have found their "missing pieces" in one another after all. There's no word yet on whether or not the couple will continue to document their journey into parenthood for national TV.