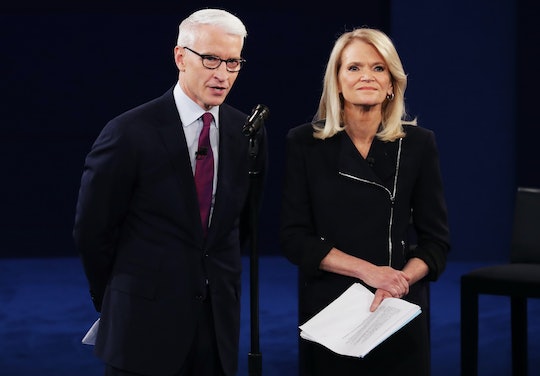 Moderating debates is arguably more stressful than participating in or watching them. (Though, the second presidential debate proved to be pretty stressful for just about everyone involved.) During Sunday night's debate, co-moderators Anderson Cooper and Martha Raddatz had to try to mediate between Donald Trump and Hillary Clinton, who are both eager to get their points across. But Martha Raddatz was our debate hero of the night, because she didn't take anyone's crap.

Raddatz is no stranger to the debate stage. The Washington Post noted that Raddatz moderated the 2012 vice presidential debate, and was a hard-hitter then, too. She kept the candidates — Joe Biden and Paul Ryan — in line, never hesitating to interrupt if she felt the candidates were getting off topic, going over there time, or refusing to answer questions.

This time around, she did the same.

If you didn't know who Raddatz was before the debate, she's a reporter with ABC News and is the network's Chief Global Affairs Correspondent. In fact, Mental Floss reported that Raddatz dropped out of The University of Utah in order to take a reporting job. She became an on-camera anchor by the age of 24, despite not having a degree in journalism. She's reported from around the globe, having visited Iraq more than 20 times in her career, risking her life on several occasions while covering bomb-dropping missions with the military.

During Sunday's debate, Raddatz calmly, but firmly, interrupted Trump and Clinton several times to redirect them to the next question, and even called them out on not answering questions in the first place. Raddatz herself is familiar enough with the issues that, at a few points during the debate, she didn't hesitate to engage in some light debate with the candidates herself:

Of course there were some who were outraged by her moderation, accusing her of being bias. But this is not exactly an uncommon complaint to hear from social media during debates, and both Raddatz and Cooper got their fair share of hate.

What viewers did see from Raddatz, which was quite different from previous debates and their respective moderators, was some real control over the voices in the room. Debates can get messy, with candidates talking over each other, the audience not staying silent — it can be hard to keep order, especially in such a tense environment. Raddatz was up to the task, and had she not moderated, those of us watching at home or online probably would have missed out on some of the comments from the candidates and the questions being asked by the audience.

The only disappointment was that Raddatz' cell phone didn't go off during the debate. According to Gawker, she's known for using Chamillionaire's "Ridin' Dirty" as a ringtone, a strategy she picked up so she could hear her phone during loud press gatherings. She got in trouble once when it went off during a White House Briefing in 2007. When Chamillionaire heard the story, he responded that he was pretty pleased that she'd picked his jam and told her to "keep it gangsta."