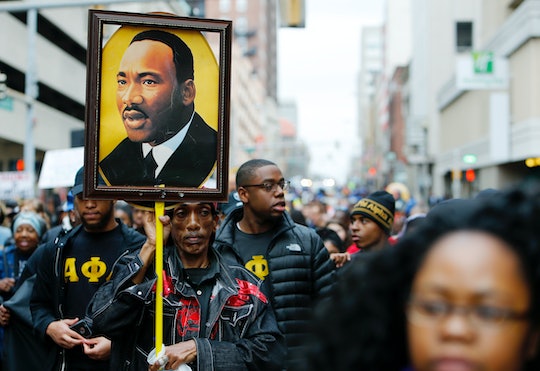 Martin Luther King Jr.'s Daughter Shares What You Can Do To *Actually* Help On MLK Day

Every third Monday in January, the United States recognizes and celebrates Martin Luther King Jr. Day, a day spent honoring the life of the man, Dr. Martin Luther King Jr., who devoted his life to fighting for the freedom of others during the Civil Rights movement in the 1950's and '60's. His messages are ones that are important to be reminded of, every single day, and in 2018, his words are still as important as ever. As you sit and think about MLK on this day and what you can do to honor him, consider taking the advice of Martin Luther King Jr.'s daughter, Bernice King, who shared what you can do to actually help on MLK Day as an upstanding member of society.

This MLK Day is very special, not only for the fact that it brings up a very relevant conversation needed to be had, but for the fact that this holiday coincides with King's 89th birthday, according to NBC News. And in honor of her father's birthday and the holiday that continues to carry his message, Bernice King took to Twitter with a simple reminder to her followers of how people should honor her father's legacy. If there should be anyone you listen to about how to honor the legacy of MLK, let's be real, it should be his own offspring.

Bernice said, on Twitter that today, people can go a step further than just sharing their favorite MLK quote to remember him by but instead, live out those words. "I pray that our global community, from educators, to politicians, to artists, to law enforcement, will truly hear his voice, follow his teachings, and demonstrate his love for humanity."

Today, you'll see his words shared on everywhere from Instagram to Twitter. You'll see snippets of quotes from his famous "I Have A Dream" speech or "Letters From Birmingham Jail." You might even share one of these quotes or graphics yourself, too — which you're more than welcome to do. But what Bernice is calling on everyone to do today is not only share his words but live them out and understand his teachings, which harp on the evils of poverty and racism and address the importance of nonviolence to enact social change. It's a refresher that everyone could use.

Living these things out shouldn't be too hard and can be an easily adopted philosophy, especially since MLK quotes are abundant and relevant. For example, MLK said in 1963, according to Biography, "The ultimate measure of a man is not where he stands in moments of comfort or convenience, but where he stands at a time of challenge and controversy." This could not be more pertinent than right now, during a time where people are being challenged as they call out their abusers and state that Time's Up. Instead of falling, these people are standing up for themselves and stating #MeToo, even if critics are trying to shame them into stopping.

Or when MLK said in 1965, according to Biography, "The time is always right to do what's right." If you're unhappy with the things taking place around you at a local and national level, you can take action on and towards those things — whether it be participating in a 2018 Women's March in your area, voting for a candidate you believe in, or supporting Black Lives Matter, which aims to stand up for the things that MLK was fighting for — and do what you believe is right for yourself and your community. Your actions don't have to be as grand as MLK's — but if you're doing the right thing, acting with a sense of purpose, and like Bernice said, demonstrating love, you're honoring his legacy.

These are only two of the many examples of MLK quotes that you can emulate and personally act on. Perhaps you can take inspiration from any of the MLK quotes shared on Twitter, where people took to share their own personal favorites and shared what MLK's words meant to them.

In addition to remembering her father on this day, Bernice asked her followers to remember her mom, Coretta Scott King, the founder of the King Center and the biggest advocate for making MLK Day into what it is today and instrumental into making it into a celebrated holiday in the United States, according to Quartz. But people are doing much more on MLK Day than living their lives the way that MLK advocated for. Currently, people are partaking in MLK Day marches in cities across the nation to honor MLK's memory and participating in service projects in their community. It's not too late to join the people in your area and do the same.

But if you're limited to your home or office for the day, consider rereading his teachings and acting in the spirit of MLK. It's something that people can do, not only today, but every day of their lives.