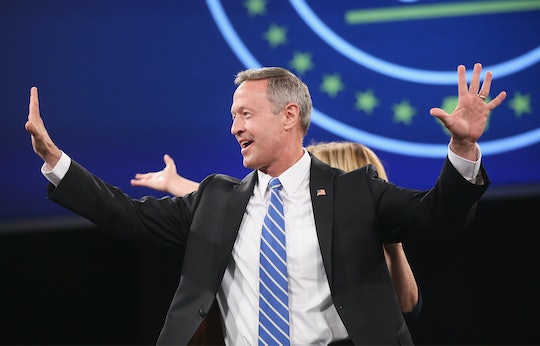 Martin O'Malley Has A Kilt, & The Internet Loves Him For It

There are a lot of reasons to admire Rachel Maddow. One if them is that she is the only journalist to uncover that Martin O’Malley has a kilt. In the Democratic Candidates Forum on MSNBC Friday night, Maddow decided to have some fun. She asked each candidate a handful of "serious" questions that she promised “would not make [the candidates] look or feel dumb.” She started off easy with O’Malley asking whether he’d hunt or fish (fish), if he ever smoked a cigarette (nope!). But then she asked about the most extravagant piece of clothing in his closet. America: Martin O’Malley owns a kilt. “It was given to me,” he swore, as visions of the candidate picking out his favorite tartan danced in my head.

It wasn't just O'Malley who got the tough questions. It's a Friday night Democratic Forum, someone had to keep it interesting. When Bernie Sanders was in the hot seat, he joked about not wanting to answer how many pairs of underwear he had in his, ahem, drawers. Sanders' dream job? "The president of CNN." And he swore he'd change the way the media interacted with pols in the future. Then he had some nice things to say about his family and granddaughters. That's all well and good — but the important thing is that Martin O'Malley has a kilt. Gift or not, it was all the Internet needed to go wild for the candidate that, let's just be honest, no one really knows exists.

And now the kilt has taken on a life of its own:

Everyone has something a little impractical in their closet, but if O'Malley wants to really get America's attention? Give us a kilt shot, Sir.