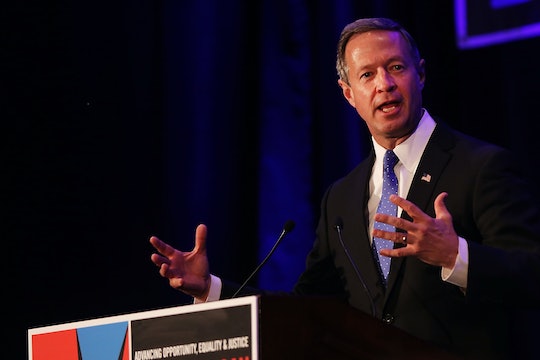 Martin O'Malley May Be Behind Clinton And Sanders In A Major Way, But He's Not Ready To Bow Out Just Yet

Even though the race for the Democratic primary looks like a two-way battle between front-runner Hillary Clinton and hot-on-her-heels Bernie Sanders, a third candidate would like to remind you that he'll be on stage too at Saturday’s debate, hoping to give them both a run for their money. Despite his single-digit support in the polls, Martin O’Malley is still in the race, and remains optimistic about his (very slow-)growing popularity. And while Clinton and Sanders will be fighting it out to see who will come out on top as the debate winner, O’Malley has a much different goal: just getting his name out there.

According to ABC News, a new national Monmouth University poll this week showed that 63 percent of Democrats don’t know enough about him to even form an opinion. But for O’Malley, this is both good and bad news: While the world will be waiting for one of the two main candidates to make a big misstep, to say the wrong thing, or to have their merit called into question by their opponent, O’Malley just has to remind voters that there is, indeed, a third option. And although he’s still a big-time longshot, his supporters note that O’Malley’s popularity increases with every debate — suggesting that it’s not yet time for him to think about throwing in the towel.

One thing that is clearly throwing a wrench into his plans, though? The not-even-sort-of-ideal timing of the debates that are so crucial to his potential for winning over voters. Already faced with the difficulty of only having six debates in total (compared to the GOP, who have twice as many), O’Malley also has to deal with that reality that half of those (including this Saturday's) have been scheduled on weekends, when viewership is lower. Add into the mix that the upcoming debate will be vying for viewers against an NFL game, and that it is the last weekend before Christmas (aka, prime shopping time), it’s no wonder that O’Malley isn’t pleased. He voiced his frustration over the timing of the debate as far back as August, according to the New York Times:

They’ve scheduled it during shopping season, December 19th. I don’t know why that is. I think it’s out of a false sense that they have to circle the wagons around the inevitable front-runner.

O’Malley camp has since continued to question whether or not this strategy was a deliberate effort to “protect” Clinton by limiting the number of opportunities her opponents have to debate her.

It’s still to be seen at what point O’Malley might decide to back out of the presidential race, but despite the huge obstacles still standing in his way, it doesn’t look like it will be happening soon. It can’t be easy to be so far behind your competition, so it’s pretty admirable that he’s determined to keep trying. You do you, Martin O’Malley. You do you.