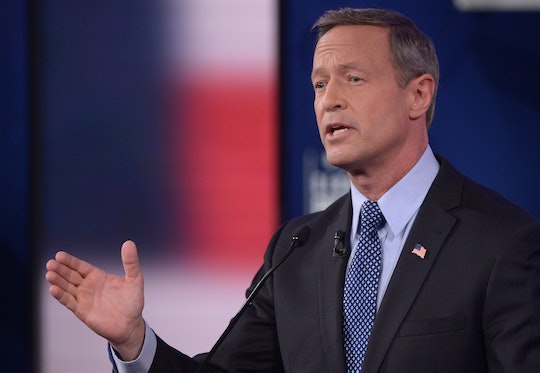 It hasn't been an easy month for Hillary Clinton's opponents. Last week, Russian hackers cracked into the Democratic National Committee's emails. Those documents, published on Wikileaks, reveal staffers' alleged attempts at sabotaging Bernie Sanders' campaign. But Sanders isn't the only one making a fuss. Martin O'Malley responded to the DNC email hack this week, and, to no one's surprise, he wasn't pleased.

The former governor of Maryland compared the email hack to Watergate and called on the American people to ignite their outrage. Speaking to Fusion's Jorge Ramos and Alicia Menendez, O'Malley said he is less concerned about the contents of the emails, than with the fact that Russian operatives may be trying to influence the presidential race.

“I think it’s outrageous that the Russians are inserting themselves into our political campaigns and doing what Nixon’s Watergate burglars did,” O’Malley said. “And there’s hardly any outrage among the people about this.”

Why would the Russians want Trump as president? According to O'Malley and others, Trump's assertion that he would pull the United States out of the North Atlantic Treaty Organization, or NATO, is appealing to Russia, the organization's longtime foe. As for the contents of the email, they are damning, but not scandalous. Certain emails show a staffer attempting to undermine Bernie Sanders' campaign by revealing him to be an atheist.

The emails back claims by Sanders and O'Malley that the DNC favored frontrunner Hillary Clinton throughout the primary season. O'Malley famously challenged the DNC to host more debates, but the requests did not go anywhere. He noted,

Look, the rules are never designed in such a way to encourage challengers. But we are beyond that now. There are bigger issues for us to focus on, and one of them is: Why do the Russians want to help Donald Trump, the first candidate in the Republican Party that wants to pull the United States out of NATO?

According to O'Malley, the timing of the hacks is important. The Russian hackers would have released the emails to coincide with the start of the Democratic National Convention, ensuring a divided party and an easier path to the Oval Office for Trump. If true, the hacks would be a historic example of a foreign government intervening in American elections. Either way, O'Malley certainly isn't ready to sit back and let the scandal fade away.