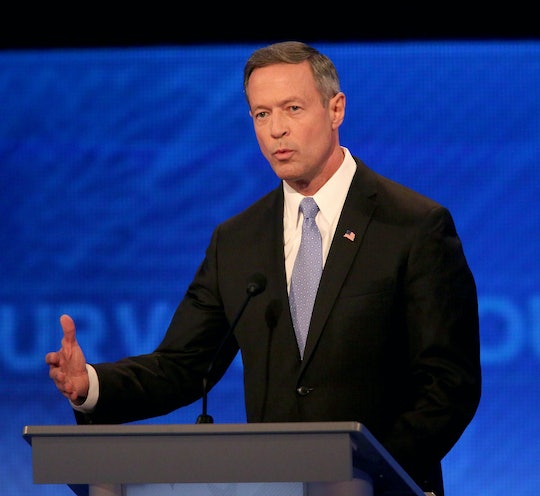 Martin O'Malley's Ageist Comment About Bernie & Hillary At The ABC Democratic Debate Got Booed, & You Can See Why

During the ABC Democratic Debate on Dec. 19, former Maryland Governor Martin O’Malley revealed he has a bit of a prejudice. Interestingly, it is not against people of a certain race or religion, but rather one that involves his competitors. Following Sen. Bernie Sanders' and former Secretary of State Hillary Clinton's respondes to a question about whether our country should first focus on ousting Syrian leader Bashar al-Assad or fighting ISIS, 52-year-old Martin O’Malley made an ageist comment towards Sanders and Clinton.

“Can I offer a different generation’s perspective on this,” he started, to some apparent boos from the audience. Worse yet, the point he attempted to make after that was undermined because, as the youngest candidate, he doesn't have as much experience with previous threats to national security. Although the audience response to that wasn’t totally audible and his opponents didn't really take the bait, people were letting their opinions about O’Malley’s comment be known on social media. One big point people pointed out is that, although O’Malley is 22 years younger than Sanders and 16 years younger than Clinton, he is in the same Baby Boomer generation as Clinton. Womp-womp.

Based on the reactions, it was clear that was a low moment in O'Malley's night — and could have negative consequences for his campaign.

During the debate, it was apparent that O'Malley was trying to have a big "moment" that would propel his campaign forward. Unfortunately for him, this moment will probably have the opposite effect.