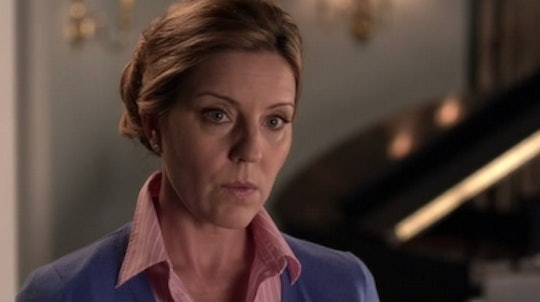 Mary Drake Is A Twin On 'Pretty Little Liars,' & Charlotte's Mom Is Out For Revenge

There are an insurmountable number of twists on Pretty Little Liars. Somehow, the writers of the show are constantly able to think of new things to throw viewers off. Sometimes these surprises come without warning, while others are teased for weeks before the big reveal. For instance, we learned that someone is a twin on Pretty Little Liars. We have it on good authority — I. Marlene King, the showrunner — that there is a twin in the midst, we just didn't know who. Well, that changed in the 6B finale, because it was revealed that Jessica DiLaurentis has a twin, Mary Drake, on Pretty Little Liars.

Let's rehash what we knew about the twin. We knew that there was one. That's about it. According to I. Marlene King, there was a twin on the show and she promised we would find out within the "next few episodes." That was said prior to "Did You Miss Me?" which was the second to the last episode of Season 6. So, naturally, we didn't actually learn who the twin was until the season finale. OK, I'll stop stalling and I'll get to the good stuff about what we know about Mary Drake being the twin of Alison's mom.

In the episode, Charles Drake's medical files were discovered by Spencer, Toby, and Mona. On them, it said that Charlotte was originally born to a woman named Mary Drake. So, who is Mary Drake? Well, that would be Jessica DiLaurentis' twin sister, it seems. In the final moments of the episode, Mrs. D's sister was seen in Ali's home with Elliot — I KNOW — plotting to "take back" what was supposed to be theirs (presumably the family fortune). She then held a picture of Charlotte, as if she was planning on doing exactly what her daughter at one point set her life goal to do: destroy the Liars' lives. With Ali now committed, this new plan of Mary and Elliot's is going to go a lot smoother than if she were still around. Also, enough with the masks, Rollins.

So, how far is Mary Drake going to go? Well, Hanna appeared to be severely injured, if not dead, in the final scene of the show, so expect Elliot and Mary to start taking names.