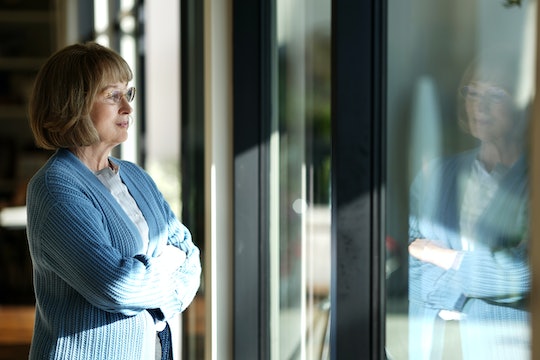 Nobody On 'Big Little Lies' Asked For Your Opinion, Mary Louise

As soon as Mary Louise arrived in Monterey for Season 2 of Big Little Lies, it was obvious that she would be trouble. But she isn't just a pushy mother-in-law, or a misguided, grieving mom. She's crossing every boundary in her bid to protect Perry's memory, including dismissing the experiences of those who were most hurt by him. Mary Louise's victim-blaming on Big Little Lies has Twitter infuriated, for good reason.

Celeste hasn't hidden the truth about Perry's abuse from Mary Louise. But her revelations were met with gaslighting and denials; Mary Louise refused to believe that the "gentle" little boy she raised grew up to be a monster. She was similarly unaccepting when she spoke to Jane about her rape. First she suggested that someone else must have assaulted Jane and she simply didn't remember; then she tried to rewrite the circumstances of Jane's attack, painting it as little more than a misunderstanding on Perry's part. When Jane remained steadfast, Mary Louise asked her to find the goodness in Perry. It was blood-boiling to listen to, both for the characters and for the audience watching at home.

Mary Louise's grief is understandable, but her behavior towards Perry's victims is not. She has to face facts about her son — facts Twitter is only too happy to point out.