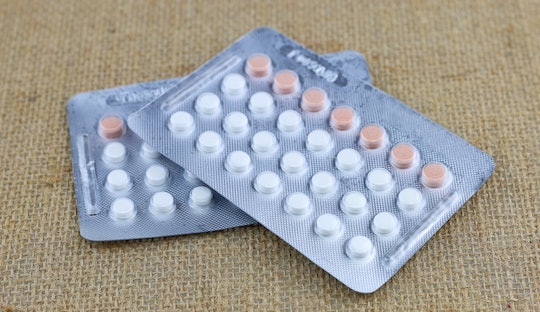 Women and other gender minorities (and plenty of men) across the nation let out a collective "WTF?!" in October, when the Trump administration rolled back an Obama-era rule requiring employer health insurance to cover birth control at no cost to women. This mandate — which was originally part of the Affordable Care Act (ACA) — gave millions of women access to birth control without co-payments, effectively removing cost as a barrier to birth control access. In direct response to the October rollback by the Trump administration, one state decided it wasn't going to stand for this nonsense. Regardless of party affiliation. As of today, Massachusetts became the first state to mandate free birth control, thanks to bipartisan support.

The new Massachusetts policy requires state health insurers to provide free birth control and it goes into effect immediately, according to Think Progress. Gov. Charlie Baker, a Republican, signed the bipartisan bill Monday evening, after it nearly unanimously passed in the state legislature. (The state senate voted 27-0 and the state house voted 140-16 in support of the bill, according to The Boston Globe.) “This is a great day in the Commonwealth of Mass,” Baker said after signing the bill into law, the Globe reported. “All the stars were aligned to make this happen,” a representative from Blue Cross Blue Shield Massachusetts told WBUR. “It was the right time and the right thing to do.”

What's more, the bill also allows plans to cover birth control pills for one year, as well as emergency contraception without a prescription, according to NPR. (This is actually something the ACA mandate didn't do, and many are calling it an improvement.) Only churches and other religious institutions are able to opt out of these plans. Insurance companies will now have six months to abide by the new rules.

Obviously, this is fantastic news for everyone in Massachusetts. Not only will birth control be free to use as a contraceptive, but it will also come at no cost to women and other genders who rely on it for many other reasons — to treat actual medical conditions like PCOS, endometriosis, irregular periods, acne, and more, according to Prevention.com. That covering birth control is even up for debate continues to baffle and enrage me.

Still, I have to say I'm highly impressed by the fact that politicians were able to recognize what's best for constituents and act accordingly, regardless of party affiliation. Wouldn't it be great if all legislative decisions were made in this same manner? No, seriously. Violent men who shouldn't have guns in the first place continue to carry out mass shootings? Let's make it harder for them to get their hands on guns in the first place by restricting gun sales to anyone found guilty of a violent crime. Because not dying and all. Women want to continue to have access to abortions because it concerns their lives and their bodies? OK! We trust families and their doctors to make their own health care decisions.

Just another reminder that it shouldn't be a partisan issue to let women and gender minorities have control over their bodies.

A. Freaking. Men. In the meantime, attorney generals from five states have asked a federal judge to stop the Trump administration's birth control rollback, according to The Hill. So thankfully, there's still hope for the rest of us. And the signing of this bill sends a clear message to Washington, D.C., as well as other states. Way to go, Massachusetts!