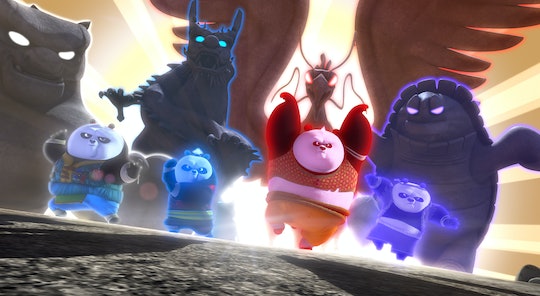 When the first season Kung Fu Panda: Paws of Destiny premieres on Amazon Prime on Nov. 16, it continues a story that started on the big screen. Protagonist Po was an underdog (underpanda?) who discovered the true extent of his power over the course of three Kung Fun Panda films (and one Nickelodeon series). Now, Master Po faces a new challenge in this exclusive clip from Kung Fu Panda: Paws of Destiny.

Fans have seen Po struggle and finally embrace his role as an unconventional hero, but now he gets to pass on what he's learned to a new generation of pandas. When Nu Hai, Bao, Jing, and Fan Tong stumble into a mystical cave near Panda Village, they become imbued with the warrior spirits of Blue Dragon, Black Tortoise, White Tiger, and Red Phoenix. They have their own destiny to embrace, but they can only do it with Po's help.

When the clip opens, Po and his young charges have scaled some snowy, mountainous terrain to find the entrance to the cave that gave them their abilities in the first place. But the cave is concealed; where there should be an opening, there's only an unmovable rock. When Po asks how they got in last time, Nu Hai offers a chipper explanation: they just ruined a priceless Panda Village landmark and crashed through the rock! Unfortunately, that's the kind of option you can only use once.

While the tiny pandas look on in excitement, Po tries to open the cave himself. He takes a deep breath and summons a sparkling orb of golden energy that he then hurls at the rock face. While it makes a pretty show, ultimately it doesn't do anything. The cave remains stubbornly closed, even as Po makes attempt after attempt to get inside. Neither knock-knock jokes nor forceful orders of "Open sesame!" will get Po and the rest of the pandas inside.

Exhausted, Po gives up, waving the kids on to give it a shot themselves. Nu Hai is convinced there's a trick lever or button that will unlock the entrance, and it only takes a moment before she's pretty much proven right. When Fan Tong first touches the stone, there's a sudden red glow beneath his paw. The others follow suit, with each paw causing a colorful glow in blue, purple, and white. The music rises, Po inhales sharply, and the rock begins to split right down the middle.

The opening magically appears, just in time for Fan Tong to announce tremulously, "We're so cool!" And then the clip cuts off. But it seems like this is early in the characters' journey to understand who they are and what their destiny might be. Po took them back to the place where it all began, but that's only the beginning. Once they step foot inside that cave, they might learn even more about what they're supposed to do with their super-special abilities.

These characters are starting down a new path, but luckily they have Po to guide them every step of the way.