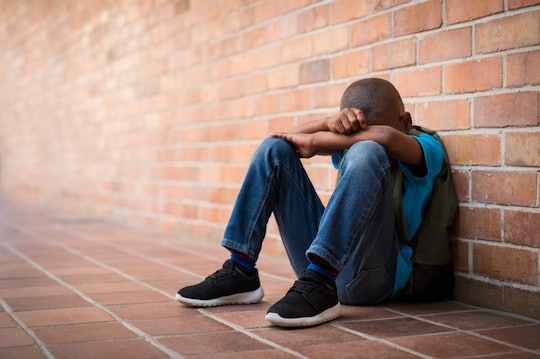 Stress is one of those things that's unavoidable and that's OK! What's important is how you respond to it. Some people stay cool, calm, and collected, while others may be more visibly stressed out. But, what if you found out that your responses to stress may be linked all the way back to your conception? A new study found that stress at maternal conception may influence kids later in life.

Americans tend to be pretty stressed out. In 2017, Gallup reported that about eight out of every 10 Americans say they frequently or sometimes encounter stress in their daily lives. The American Psychological Association's Stress in America survey also found that recent stress levels in the U.S. population are at a 4.7 or 4.8 on a 10-point scale, depending on where people lived.

They also found that the most common stress sources are money, work, the economy, family responsibilities, and health concerns, according to the APA's website.

When people see the word "stress," it's easy to think that's the end of the world, but that's not always the case. Some stress can be good, as outlined by Psychology Today, and perfectly normally, like when you're stressed before the first day of school.

But, what determines just how stressed out certain events make you?

A new study published in the Journal of Developmental Origins of Health and Disease decided to examine what role maternal stress at conception may play in determining kids' stress levels, as reported by News Medical.

Researchers conducted their study by examining cortisol levels from future moms beginning before they were pregnant and then they continued to look at these levels through the first two months of their pregnancy, according to Science Daily. Then they looked at cortisol levels years later in their children.

Cortisol is like your body's "alarm system," as outlined by WebMD, and is produced by adrenal glands located at the top of your kidneys. You can use cortisol to essentially read how stressed someone is by conducting a cortisol urine test, as researchers did in the study.

Researchers looked at how the kids reacted to the beginning of a new school year (a "natural" stressor) and to a "public-speaking challenge" (an "experimental" stressor), as noted by Science Daily. They found interesting results.

This means that maternal cortisol was connected with different ways that the kids responded to stress, plus these associations differed depending upon whether they had boys or girls, as outlined by Science Daily.

Pablo Nepomnaschy, who led the study, said, according to Science Daily, "Stress plays a critical role not only in children's ability to respond to social and academic challenges, but also in their development and health as adults."

More studies need to be done to better understand how a mother's stress levels at conception might impact their kids later in life. For now, though, the study shows that there is just might be some type of link that's worth looking into.