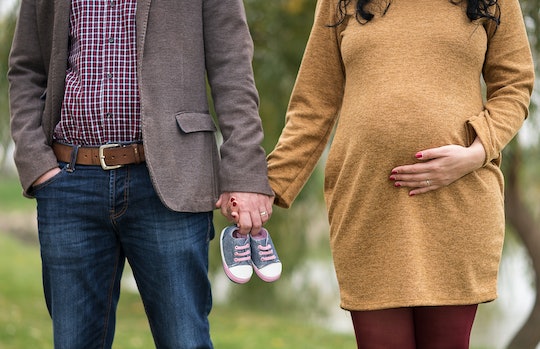 Maternity Discrimination Is Real & It Happened To Me

Being pregnant can suck. I know I’m not supposed to think that, but it’s true. Movies and Instagram will have you believe that it goes perfectly, that growing a human is a breeze. There is of course the physical stuff — the severe morning sickness, the fatigue, the impact on your pelvic floor. Worse, I was subjected to discriminatory behavior when I was working full-time in early pregnancy in the UK.

It wasn’t done openly, it was subtle and ended with my embarrassing dismissal from the company, very conveniently at the end of my probation period. When I was 20 weeks pregnant, and when my role was “no longer needed.” I was left out of a job, no regular income and with a newly formed human arriving in just a few months’ time.

In the UK, you need to inform your employer of your pregnancy at least 15 weeks before your due date, per the government, which provisions antenatal leave as well as maternity leave. Standard practice is to wait until you’re 12 weeks in before telling anyone except your significant other, as that’s when the first scan takes place and it’s when the risk of miscarriage is reduced.

Back in reality, I had to inform my employer of my bun in the oven before 12 weeks. In fact, it was about seven or eight weeks in. I was suffering from extreme nausea that had me slumped at my desk wishing the days away and holding back the tears. While I would only actually vomit first thing in the morning, the waves of sickness would have me power walking to the bathroom just off the main office several times a day to run the tap and retch over the toilet. I had no choice but to tell a manager.

Their reaction should have been my first red flag. They looked me up and down and asked me firstly if the pregnancy was planned, and secondly whether I was happy. I put on a slightly strained smile and thought things actually would be OK. I had someone on my side now after all.

But it didn’t quite go down that way. Due to my bad morning sickness, an ongoing chest infection, strained ribs and chest muscles, and the fact that we were a month out with our predicted conception date, I needed a lot of doctor’s appointments.

Work was taken away and re-assigned with no warning. I was left out of email chains and suddenly expected to be in the know regardless.

Unfortunately unless I could explicitly prove that my appointments were strictly related to my pregnancy — i.e., with a letter from the hospital — my time out of the office was taken out of my holiday allowance. Or I had to make it up to ensure all my hours were logged correctly. There was zero concern for my well being.

Compare this to the announcement my partner made. He wandered into the office when I was six weeks pregnant and simply stated, “I’m going to be a daddy again.” His colleagues got him a card signed by everyone wishing us both the best of luck. And he was allowed to attend each and every one of my appointments, no questions asked.

When we finally did make an announcement to the big wild world, it was with all the bells and whistles you’d expect of a millennial first-time mum. A blog post, perfectly crafted Instagram picture, and a Facebook post that allowed us to share happiness with our nearest and dearest. And then I went to share the news with my colleagues.

It turns out they already knew. And let’s just say things went downhill from there. It would be easy to say that things were all in my head — I’ve had people hint that towards me ever since — but I like to give myself a little more credit than having an imagination gone wild.

Any attempt for me to fit work around my family life and childcare commitments was met with rejection and contempt. I started being left out of meetings, both with and without clients. Work was taken away and re-assigned with no warning. I was left out of email chains and suddenly expected to be in the know regardless. But on top of that — and I certainly didn’t imagine this — I started to be spoken to like absolute crap by my manager.

It turns out, it’s not as uncommon as you might think. While this is reassuring that I’m not alone, it’s horrible to read that this happens up and down the country. In fact, a study in 2015 showed that 54,000 women lose their jobs every year due to maternity discrimination. And it's not just in the UK. Nearly 31,000 cases of pregnancy discrimination were lodged with the Equal Employment Opportunity Commission in the U.S. between October 2010 and September 2015, indicating violations of the Pregnancy Discrimination Act, according to National Partnership.

“Discrimination ranges from really subtle acts, to direct discriminatory comments and actions,” explains leading UK pregnancy discrimination solicitor, Danielle Ayres. “It can occur from the point an employee notifies the employer that they are pregnant through to returning from maternity leave. On return, women find that there have been substantial changes to their job and the business in which they work that they have not been consulted about, some even return to find that they have no job to go back to due to it becoming redundant whilst they were away and not being told, or they find that they have effectively been replaced by their maternity cover.”

On my second to last day, I was struggling. My stomach couldn’t keep water down and I was bringing up everything I tried to eat. By this point in the week I had already had several anxiety-inducing messages that were incredibly stressful and bringing me to the verge of tears. My heart pounded as I typed the message asking if I could go home and recover in bed within dashing distance of the toilet. Reluctantly, at about 11 a.m., I was allowed to leave.

I got home and immediately dissolved; I completely broke down. Just a couple of hours later, I received messages from the same manager demanding to know why a certain piece of work hadn’t been completed — due to a client’s request to see the work before it was uploaded — along with a statement that I had been told this before, and that my inability to complete it this time was unacceptable. The messages boarded on verbal abuse.

The tears started again and I called my partner in a panic. I was about to be let go, I knew it. At just under four months pregnant, I was going to be out of a job.

I started preparing for the worst. I looked for new roles, knowing deep down that I would never get hired at this stage, arming myself with knowledge on maternity discrimination, and I sent messages to two senior colleagues asking for details of the external company that handled our HR. Both people pointed me to the same person; my manager. Cue red flags waving everywhere.

That’s when I knew I was definitely on the way out. There was no HR to back me up.

I took the next day as a sick day; I still couldn’t keep water down. And sure enough, an email (yes, an email) came through from the managing director in the afternoon stating that my probation was due to end the following week and they had concluded that my role was no longer required. Accompanying this statement was a list of reasons why I wasn’t good enough for the job, including multiple things that had never taken place.

It turns out that this is usually how it goes down. “Often in pregnancy and maternity discrimination cases,” explains Ayres. “It is difficult to show that the woman is being treated unfairly or being discriminated against on the grounds of her pregnancy or taking a period of maternity leave.”

I feel like I’ve been punished for getting pregnant.

So, that was it. It was all over. I immediately took up freelancing, barely making enough myself to scrape by and having to rely heavily on my partner. I told friends and family a slightly distorted version of the truth, and that I was thinking of going self-employed all along.

The actual truth? I feel like I’ve been punished for getting pregnant and for being unwell in the first part of that journey. Punished for doing exactly what women are criticized for doing, but also not doing if instead they decide to focus on their career.

Maternity discrimination is a profoundly negative subject. It affects thousands of women every year, ranging from subtle comments to outright dismissal, but we can change the culture by calling it out.

To report discrimination to the U.S. Equal Employment and Opportunity Commission, go here. To make a claim to the UK Employment Tribunal, go here.