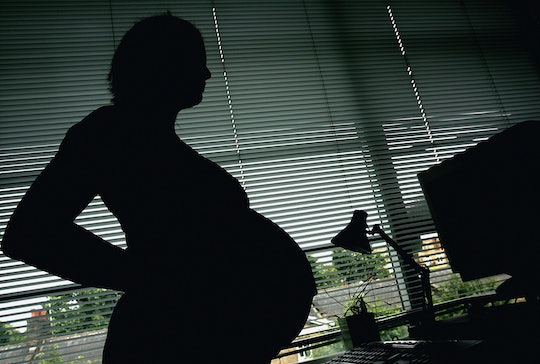 Why Women Are Still Hiding Their Pregnancies At Work

Prior to having children, Sophie* had no reason to think that workplaces would be anything but incredibly supportive toward pregnant employees. Then a girl she worked with had a miscarriage, discussed in low tones by coworkers at the coffee machine. “In the days leading up to the miscarriage, this girl had been working really hard, working late, and generally been under a lot of stress — it was almost like ‘let’s squeeze every ounce of work out of her before she heads out on her maternity leave!’” Sophie recalls to Romper. “Things got so bad for her, she eventually left. We all knew she’d left because of ‘her health’ but we also knew she hadn’t got the organizational support and care she should’ve got, which was also not surprising.” It was a classic, slightly nebulous case of maternity discrimination — illegal, and yet hard to pin down.

Sophie had been working as a magazine editor and writer for a decade, with a regular gig freelancing for a former colleague, when she got pregnant. The assignment she got next was her last, she says.

“I never mentioned anything about wanting to scale back on work; there was no mention of any budget cuts or cutting back on outsourcing… In fact, in an earlier conversation, we’d even discussed some editing work, because one of her deputies had quit, and she was wondering if I could help out till she found someone new. That conversation never picked up again.”

Sophie says the change following her pregnancy announcement was simply too abrupt to be a coincidence.

Romper spoke to several women who found that pregnancy can cause more distress than joy in a woman’s life, especially those who are expecting for the first time, due to the implications for their treatment at work. As defined by the U.S. Equal Employment Opportunity Commission, maternity or pregnancy discrimination is, “discrimination on the basis of pregnancy, childbirth, or related medical conditions constitutes unlawful sex discrimination under Title VII. Women affected by pregnancy or related conditions must be treated in the same manner as other applicants or employees who are similar in their ability or inability to work.”

Of all the new mothers interviewed, one in 20 reported that after returning to work post-pregnancy, their wages or bonuses were cut. (Equality and Human Rights Commission)

Despite being outlawed by The Pregnancy Discrimination Act of 1978, this is a hurdle thrown at expecting mothers every day. In addition to the Pregnancy Discrimination Act, lawmakers made changes to the Americans with Disabilities Act in 2008 that require employers to make any necessary and vital accommodations for employees who are pregnant. But, despite the laws and regulations set forth, maternity discrimination is still widespread internationally. Between the years 2010 and 2015, approximately 31,000 cases of pregnancy discrimination were filed against employers in the United States. In 2015, the Equality and Human Rights Commission found that nearly 54,000 new mothers were fired each year. That same study revealed that of all the new mothers interviewed, one in 20 reported that after returning to work post-pregnancy, their wages or bonuses were cut.

“I knew pregnancy discrimination was real and prepared myself for the worst,” said Sam,* who got pregnant for the first time in 2016 while working at a nonprofit. Prior to expecting her first child, she was very aware of maternity discrimination and how treacherous it can be. “I’ve had friends lose job promotions and have to cobble together sick days/vacation days to supplement their FMLA. I’ve also had friends quit their jobs, as daycare costs were more expensive than their salaries would allow.” She says that while she was finishing her doctorate, a fellow student was “benched” during and after her pregnancy, told by her supervisor that she needed to “focus on her family.”

After finding out she was pregnant, knowing what she did about pregnancy discrimination, Sam was anxious to inform her employer, but wasn’t sure the ideal time to do so.

“You’re not supposed to tell anyone until after the first trimester, when the miscarriage rate plummets. But the first three months are the hardest: You are exhausted, constantly nauseous (I was especially so), and your brain gets foggy with both the dizziness and the exhaustion. So what do you tell everyone when you're sick all the time?”

I was treated to a 9 p.m. phone call of her screaming over how ‘unprofessional’ I was. I was told that I was exaggerating my sickness, and that she was going to do everything in her power to ‘teach me a lesson about work’ and that I needed to ‘watch out.’

Sam’s manager did not have children, and was a “micromanager” who pushed her boundaries, regularly calling after 8 p.m. and expecting email responses even while overseas on vacation. “I was scared to tell her I was pregnant, fearing she would harass me into quitting or worse, suffer physically and psychologically to the point of hurting myself or my unborn child.”

And her fears were correct. Sam says her boss scheduled multiple meetings for after hours to “teach her” about hard work, and hovered over her desk as she composed emails. When she missed an evening meeting due to vomiting, Sam says “I was treated to a 9 p.m. phone call of her screaming over how ‘unprofessional’ I was. I was told that I was exaggerating my sickness, and that she was going to do everything in her power to ‘teach me a lesson about work’ and that I needed to ‘watch out.’”

Maria* was working in the legal/marketing field in the ‘90s when she fell pregnant, and saw a similar shift in the dynamic between her and her boss. Once morning sickness took hold, her boss began to complain that her work performance was subpar. She asked him to discontinue use of his cologne, which made her nauseous, but he refused until she threw up in front of him into a trashcan in her office one day.

“I was put on bed rest six weeks before my due date, because my heart was being strained by the pregnancy,” Maria says, “and my boss complained about that to me and my coworkers and made open comments about my not pulling my weight. After the baby was born, I was expected to go back to work before my six weeks of leave were over and traveling immediately with a newborn at home.”

There were no legal requirements to provide a private space to pump milk at that time, and Maria was told to use the bathroom, though the mail clerk took pity on her and offered use of the mail room. A supportive spouse got her through that time, but Maria felt she had no recourse at work for her treatment, and was amazed that her boss had so little empathy for a pregnant woman. “He had kids of his own, but his wife didn't work and he didn't understand the balancing act that being pregnant and working requires.”

What accommodations should employers make for pregnant mothers, especially those who are dealing with bed rest or morning sickness? According to attorney Brendan Chao, the answer is far from black and white.

“The employer would be put in a position where they would have to at least engage in a dialogue with the employee to see what accommodations are necessary. If an employer was mistreating somebody because of the potential for having to accommodate, that’s also discrimination,” Chao told Romper. “The mom-to-be would certainly need to speak with her doctor, get some type of diagnosis, go to the employer and explain [what’s going on]. Depending on the severity of it, they’ll have to plan accordingly. I’ve seen situations where the pregnant woman was allowed to come in a little later because the morning sickness would strike regularly at the same time every morning. Hopefully the employer is willing to talk about it; That’s really the key in all of this.”

The micromanagement and bullying that I faced were nonexistent after the former boss was removed.

Aware of her rights as a pregnant employee, Sam wrote down everything that had happened to her, and forwarded abusive emails she had received from her boss to the board of directors and national HR office. After reporting her maternity discrimination to HR, Sam’s boss was removed and her new boss was nothing short of accommodating and loving.

“The micromanagement and bullying that I faced were nonexistent after the former boss was removed,” says Sam, who went on to grow the program she managed by 83 percent in the year she was pregnant, and received two awards from her organization.

In the end, a supportive atmosphere at work has convinced Sam to stay. “I’m never leaving this organization, knowing how much loyalty they have given to me as an employee.”

Sophie went on to find an editor who offered her extended deadlines, and says that around the time her daughter was born, in late 2016, the conversation around maternity leave and retention of female workers had grown. “Believe women when they say it happens. ‘Women will get pregnant and leave’ is still not a valid excuse to not give us jobs, to not give us equal pay, to not give us equal opportunities. We don’t want to leave: You just won’t help us stay on.”

Maria has seen incremental change and added protections, but thinks women still suffer the same issues she encountered two decades ago. “There is a perception that pregnancy is a burden on the business and pregnant women aren't contributing to the bottom line. I have known women who are afraid to tell their employers or won't interview while pregnant because they are afraid they won't be perceived as viable candidates or committed to their jobs.”

Her concern is that the discrimination doesn’t stop after the child is born. “It won't go away until more mothers are in power and there are consequences for this type of discrimination.”