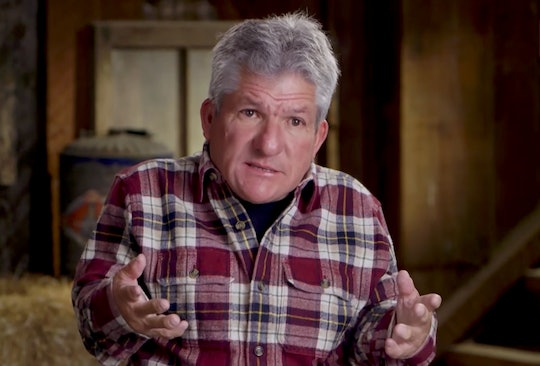 After welcoming their first child on May 12, Little People, Big World's Tori and Zach Roloff confirmed that, like his dad, their son, Jackson Kyle, was born with a form of short-limbed dwarfism called achondroplasia. Since Jackson had about a 50 percent chance of inheriting the condition, it was definitely a topic on the entire Roloff family's minds ahead of the birth — including Zach's parents, Matt and Amy. In the show's most recent episode Matt and Amy Roloff discussed baby Jackson's dwarfism, according to Us Weekly, and while they didn't necessarily share the same viewpoint, they both seemed to have some concerns about their first grandchild's impending arrival.

Matt and Amy may no longer be a couple, but as co-parents anticipating Jackson's birth — and as people who also have dwarfism — they were feeling understandably nervous ahead of Tori's nearing due date. After Jackson's birth, Zach and Tori told People that they'd learned about their son's achondroplasia diagnosis during an ultrasound at 34 weeks gestation, but in the most recent episode of the Roloff's reality show, that ultrasound hadn't yet occurred. Ahead of the appointment, Matt asked his former spouse what her "prediction" was about whether the baby might be diagnosed with dwarfism, according to Us Weekly. Amy was reluctant to answer, and responded by saying, "It'll be whatever it's meant to be." Matt, on the other hand, said he "had a feeling" the baby would indeed have dwarfism.

Though he admitted he was "not an expert," and was obviously just speculating, Matt said he was "feeling some LP coming on." But either way, the grandfather-to-be said he didn't think it really mattered all that much:

You know, as far as the baby being 'little person' or 'average person,' it doesn't really matter. I'm going to be excited about either one.

Despite not wanting to make any predictions, Amy did voice her concerns about the possible complications that might arise if the baby were to be diagnosed with achondroplasia, and spoke about the possibility that Tori might need to deliver by C-section. She said,

The doctors and everyone, if it is going to be an LP baby, they just need to be a little more aware. Tori may have to have a C-section. I would hope that an average-sized person could push the baby through, whether it's a little person or average-sized. But you just never know.

She then admitted that "parts of [her hopes] it's average-sized," primarily because she worried about her grandchild experiencing the same kind of health complications that Zach went through as a baby born with dwarfism.

According to the March of Dimes, babies born with achondroplasia can experience further complications like apnea, chronic ear infections, compression of the spinal cord, and hydrocephalus, a condition where fluid builds up in the ventricles of the brain. After developing hydrocephalus himself when he was younger, Zach required surgery to insert a shunt into his head to drain the fluid, but according to WSBTV Atlanta, he actually admitted during this week's episode that he feared he may be having a problem with his shunt.

But after telling his parents that he'd actually been suffering with the the symptoms for "month," Zach explained that Tori's pregnancy and nearing due date had caused him to put off seeking medical attention. Zach said,

I don’t really talk about it because there’s already so much happening ... Now would be a terrible time for me to have to go into surgery. Tori has already gone through enough. I don’t want to frighten her.

At his parents' urging, Zach did eventually see a doctor, who determined that there at least wasn't any immediate issue. Now that Zach is a dad to a baby with dwarfism, his own health scare might have made him a bit more nervous about his son's future, but he's also said that he wasn't specifically hoping for an average-sized baby. In an earlier episode, Zach said,

Concerns about dwarfism aside, now that Jackson is actually here, it's more than obvious that the entire Roloff family is totally in love with him. In a recently Instagram post, Amy shared a photo of the family of three, and wrote,

Wow! I'm in awe of my grandson Jackson and Zach and Tori as parents. They're beautiful. My heart is overwhelmingly full of joy and love.

Even the youngest Roloff sibling, Jacob — who is no longer participating in the family's reality show — gushed on social media about his new nephew. After posting his own pic of baby Jackson on Instagram, Jacob wrote that he "[loved] being an uncle so far."

As grandparents, it seems only natural that Matt and Amy were a bit nervous ahead of their grandson's arrival — and as little people themselves, it also makes sense that the possibility that Jackson could have achondroplasia was on their minds. But regardless of his diagnosis, he is clearly a very loved little boy, and one who will grow up with a lot of supportive family around him, no matter what obstacles may or may be in his future.