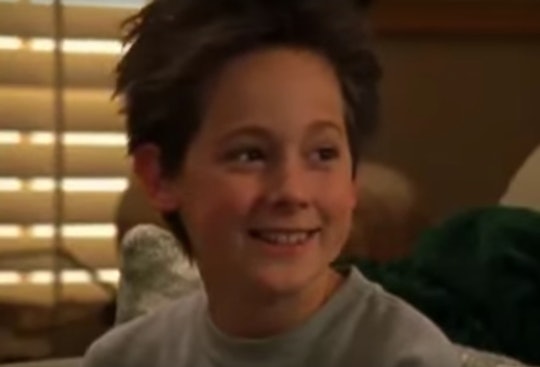 Watching the premiere episode of Lizzie McGuire is one of the few moments of my childhood that I remember with perfect clarity. I was 11 years old and I was hoping desperately that my (slightly overprotective) parents wouldn't decide that Lizzie was too mature for me after all. I identified deeply with Lizzie McGuire. We both had questionable taste in pants and we both had annoying little brothers. 17 years later my little brothers are way less annoying and, it turns out, so is Lizzie's. Matt — Jake Thomas — spoke with Romper about playing Matt McGuire, being a kid on set, and what he's doing these days.

Of course, almost as iconic as the show itself was the Lizzie McGuire Movie, in which Lizzie and her class go to Rome, Lizzie trades places with her Italian pop star doppelganger, and realizes she's been in love with Gordo the whole time. If you're not singing "This Is What Dreams Are Made Of" in your head right now — you're lying. But according to Thomas, the cast only shot for a week in Rome and the rest of the movie was shot in Vancouver. He didn't even get to go! "And yet I see like constantly when people take photos in front of the Trevi fountain, I’m constantly tagged in photos from it, and I’m like, 'Sorry I’ve never been there!'" Thomas laughs.

He explains, "They just shot the exteriors with like five or six cast members, and then everything else that was interior was shot in Canada." But, he assures me, this is not to knock Canada, adding, "We had an awesome time in Canada for like three months. We had a great time there." While the movie was my favorite Lizzie McGuire memory, Thomas has a harder time pinning down a single moment he enjoyed the most. He says for his character at least, the general attitude was "what kind of crazy, wacky thing are we gonna do today?"

You can't exactly blame him for everything blending together a bit. He tells me that because the whole thing had to be filmed while the kids were still, well, kids, they shot all 64 episodes of the entire series in just two years. "Like we were, like, non-stop because the thing is, ya know, we were all really young and they were trying to get all these episodes filmed as quickly as possible before we grew up," he says. Couple all that with being a literal child who has to go to school and you know, be a kid, and you have a pretty bananas work schedule.

And it seems like these days Thomas is just as busy as when he was irritating Lizzie with his 10-year-old antics. He's still acting, but he's also working more behind the camera as well. And this work, it turns out, has brought him full circle. Thomas tells me he's started working as a commercial photographer and director. He's also started shadowing directors to learn more about the craft — and this has taken him back to his Disney roots. "I shadowed for directing with one of the Disney multi-cam shows," Thomas says, saying that a few of his meetings with executives were in the same building where they cast Lizzie McGuire all those years ago. "It’s kind of a weird like coming home kind of thing where it’s like I’m seeing my involvement on the other side." He adds, "Cause one of the executives I was meeting with, he was around during the Lizzie days, and you know around his office was little memorabilia of Lizzie McGuire." You know what they say, you can't escape your past.

Luckily for everyone, it doesn't seem like Thomas really wants to escape his Matt McGuire past, and looks back on his time on the show fondly. Sure, it changed his life forever but, for the most part, it looks like that was in a good way.