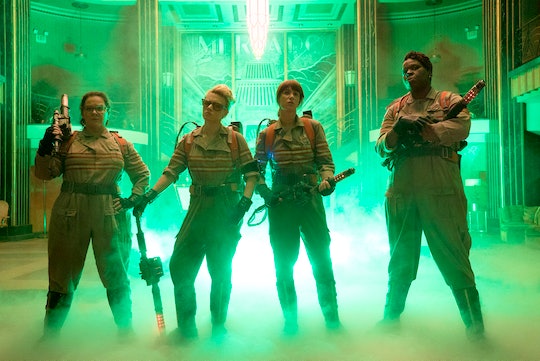 After the glowing success of the premiere of Ghostbusters, it's no surprise that the brand is seeing something of a comeback. Just like for the last incarnation of the series, Mattel launched a line of toys based on the movie — but, this time, they are modeled after the female-led cast of the reboot. While the concept for the movie had some naysayers, it has gotten rave reviews. Similarly, Mattel says Ghostbusters toys 'exceeded expectations' for boys and girls, proving once again that gender does not make toys less cool.

Mattel is known for its progressive toy-making. It has made huge strides in making Barbie more diverse racially, in terms of body-type, and in terms of career aspirations, according to the Los Angeles Times. It has featured boys in its Barbie commercials, showing that Barbies are for everyone. It took a similar approach in the way it marketed the Ghostbusters action figures, according to its press release. First, notice the term "action figures." Typically, a a woman figure might be called a "doll," but not so here. Mattel put the Ghostbusters action figures in the toy aisle for boys (who knows why they are still separated by gender), and emblazoned the packages with the tagline, "Everybody wants to be a Ghostbuster."

While the slogan may have felt ho-hum in 1984 when the original film came out, on a package of women Ghostbusters it feels revolutionary. It's asserting that Ghostbusters aren't a certain gender; anyone can be one, and everybody wants to be one, no matter who they are. There's unity there, and acceptance. It's a statement that was missing in the original films — funny as they are — but is loud and clear in the modern-day remake.

Mattel reported on Friday that its sales numbers at its most popular retailers are very good. The action figures, the mini-figures, the Ecto vehicle, and the Proton pack are all flying off the shelves because boys and girls are asking for them. Joe Lawandus, senior VP of design and marketing at a division of Mattel, expressed his excitement when he spoke to Variety. He said,

We’re thrilled with the response to the new Ghostbusters toy line. We worked closely with Sony to ensure each figure featured authentic details from the movie including a wearable proton pack. The early momentum shows the product is resonating with ‘Ghostbusters’ fans!

That response is not too surprising given the box office numbers. Ghostbusters netted $46 million in ticket sales in its first weekend, according to Deadline.com. It was able to capitalize on old fans interested in the reboot, and new fans looking to see a summer comedy. While its sales are reportedly not as high as many had hoped (partially thanks to the sexist backlash), the film is being hailed as a success in breaking Hollywood barriers. The star-studded cast includes Melissa McCarthy, Kristen Wiig, Leslie Jones, and Kate McKinnon, all of whom have been turned into life-like action figures that boys, girls, and pretty much everyone wants to own.