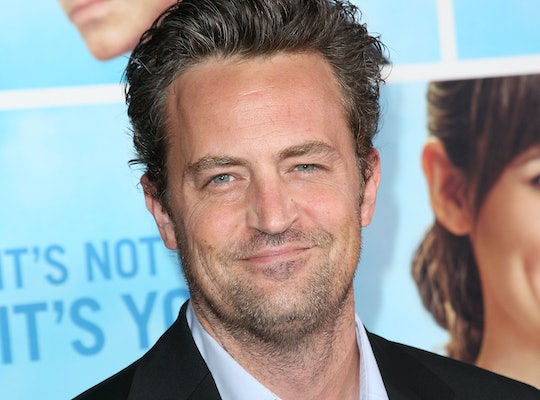 Way to BE a killjoy, Chandler. Following the announcement that a Friends reunion would finally be happening in honor of James Burrows (the man behind the magic, aka the show's creator and part time director) with the entire Central Perk gang, comes this totally uncool news. Matthew Perry won't attend the reunion. Of course, that's because he's in rehearsals for his play The End of Longing in London. But really. How posh of you, Bing — nice job leaving the rest of the squad hanging.

Alright, so it's a legitimate reason (I guess). Perry's rep, Lisa Kasteler, told Us Weekly that to make up for his absence, Perry would likely tape some sort of tribute to Burrows that would play during the reunion, but that's just not the same thing as the real live Chandler Bing.

Fans of the best show ever were super stoked on Jan. 13 when NBC chairman Bob Greenblatt first announced during the Television Critics Association winter press tour panel that the Friends cast would reunite in honor of Burrows (that special is set to air on NBC on Feb. 21). Pal Matt LeBlanc (the original Joey) tweeted that he was revved to reunite with his costars — even it was sans his best buddy. "Should be a good time," LeBlanc wrote this week, linking to an article about the event itself.

So, in honor of Chandler, er, I mean Perry's absence at this event, I thought I'd put together a list of gif-able reasons we all just love Chandler (and okay, Perry) which also serve as a reminder of how much we'll miss him at next month's reunion:

So much better than an eye-roll.

Do I spot a Beyoncé windmill booty jiggle going down next to the foosball table?

His Dance Moves While Smoking A Cigarette

Proving how stupid smoking is, Chandler does this extra special dance in the snow while puffing away.

His Appetite For Cheesecake

Listen, I'm not saying that girls are the only emotional eaters, but Chandler has always been accused of being a little bit femme. (Which is rad.) Why not embrace it?

This move is, like, so manly. No really, only a man would do this.

He's Got A Way With Words

He Owns His Awkwardness

Chandler pulls off self-deprecation in the cutest way.

He Gets The Girl

And not just any girl. Monica has very some specific, er, demands. Seven of them to be exact. Seven.

Friends is more than a show about adults growing up in the big city — in fact, it has the ability to remind you of one of the BFFs in your own life. Even without Perry attending the Burrows tribute, fans will very likely be watching as a fab five reunion goes down. I guess Perry will just have to be there for all of them (and us) in absentia.