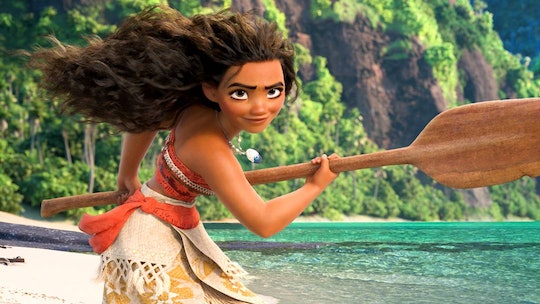 Maui Calls Moana A Princess In 'Moana', But She's Much More Than That

“I am not a princess,” a determined 16-year-old Moana insists in Disney's most recent film, Moana. Her demigod companion, Maui, combats her statement. “If you wear a dress and you have an animal sidekick, you’re a princess,” the tatted hero barked back. Not to pull from the current political climate but, wrong. In the new film, Moana is more of a badass heroine than a tiara wearing princess. Not that anything is wrong with the latter, but in the current political and cultural climate, seeing a protagonist like Moana feels incredibly important. So, when Maui makes the princess comment to Moana, and she quickly rejects it, you can't help but feel a small victory for girls everywhere.

Directors Ron Clements and John Musker side with the animated teen, according to an interview with Time. “I don’t know that any of the other princesses we’ve been involved with we’d describe as badass,” Clements admitted in the interview with Time. He continued: “'we saw [Moana] as a hero’s journey, a coming-of-age story, in a different tradition than the princess stories."

During the interview, Musker shared similar thoughts as his writing partner.

“'We thought it would be very appealing to do a female empowerment story that didn’t center on any sort of romance. We saw it as sort of a True Grit-type story: the determined girl who teams up with a washed-up guy. They have this adventure and she finds her true calling—and saves the world in the process.'"

Going off of what the directors already said, Moana certainly breaks the Disney princess mold in more than one way.

Moana is only 16 in the film. She is young, determined, and has no interest in dating since she doesn’t need a man to accomplish her objectives. Like all good leaders, Moana sets goals, and creates game plans to achieve them. She is her own cheerleader, and chases her dreams with the ocean as her compass instead of a present from some John Smith.

Contrary to other princesses, the Polynesian princess is not like Snow White who reaps pleasure from being the pursued. She is the pursuer. Moana doesn't learn to be led on some dance-floor like Cinderella, instead she is trained to steer her own boat. She goes after what she wants with a fiercer determination than many of the male counterparts in recent animated movies. Moana's longing for romance is replaced with a love for adventure. So, when the opportunity arises to hop on a raft and stave off monsters, she is all aboard.

Moana is also one of the first princesses, that I can remember, to verbally denounce her "princess" title. She is unapologetic for her opinion, honesty, and for being straight-up with her emotions. She is no voiceless Ariel, that’s for sure. In fact, the heroine confronts Maui repeatedly. During a heated interaction, Maui tosses the chief's daughter from the canoe. Because the ocean is on her side, Moana gets back on with an intense scowl on her face, arms crossed, and stands up to her detractor. Her anger is palpable, and showing that takes a lot of moxie for a young girl.

Moana is the pillar of strength in this film. She picks Maui up when he emotionally falls down. She doesn't stand for the patriarchy, and has the heart beat of a superhero, not a 16-year-old. It's the perfect role model for young girls. And sure, let's call Moana a "princess", but only if a "princess" is a determined, loyal, fearless young woman who will not stop for anything to help those she loves.