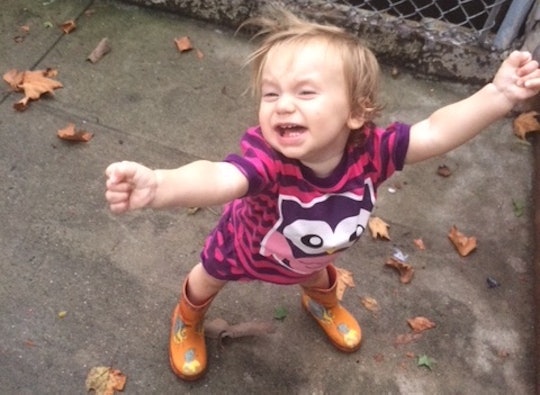 While I was pregnant, I practiced yoga every day. I meditated. I took long, soothing walks in the park, sat in lavender baths and massaged my belly. For the first time in my life, I took it slow because I was determined to give birth to a calm child. An easy child.

None of it worked. My daughter somersaulted out of my body, pooped all over the doctor, and let out a mighty roar, ready to rampage through the world. And rampage she does, whenever it’s nap time, or someone dares try to buckle her into a car seat or stroller. Although I suspect she enjoys the spectacle of the stroller, an opportunity to show off her extraordinary spinal flexibility and arching so far back she can almost kiss her own pamper. My girl knows exactly what she wants and she isn’t afraid or timid about letting you know that she’d rather have pizza than pasta for dinner. Like most toddlers, her opinions are rooted in fierce emotion. But sometimes, my daughter’s feelings seem like the most gargantuan in the room, in all of Brooklyn. So big I don’t know what to do with them, and neither does she, which is how we’ve found ourselves at our current juncture. My daughter has started using her hands to express her frustration and rage, and sometimes even her excitement. Face-scratching is her signature move.

Maybe this sounds like normal toddler behavior, but it doesn’t feel normal. I don’t see any other parents hovering around their child at play dates to make sure she doesn’t draw blood.

A few weeks ago, my husband and I were talking about how to discipline our daughter without destroying her fire. Because time outs, forced apologies, and daily readings of the classic Hands Are Not for Hitting didn’t seem to be helping.

We’d gotten to the point of actually considering whether a gentle spanking was the right response when I threw up my hands. “I don’t know what’s right anymore,” I said. “I have no standard to judge by. She’s nothing like us.”

As soon as I said it, I realized: this could be a good thing.

My daughter was walking at 7-and-a-half months. And at 17 months, she is not afraid to run headfirst into the mess of life and grab whatever it is she wants.

My daughter is willful, determined, and smart. She pushes my hand away when I offer her help because she is confident that if she tries hard enough, she will eventually be able to put on her boots or eat with a spoon by herself. She’s right. My daughter was walking at 7-and-a-half months. And at 17 months, she is not afraid to run headfirst into the mess of life and grab whatever it is she wants. Unfortunately, what she wants at the moment is usually the toy of another toddler, or the box of cookies I thought were well-hidden on top of the fridge.

So what do I do? Helping my daughter regulate her emotions without shaming her for feeling so much is a huge challenge, perhaps the largest, most important one I’ve ever faced. Because in time, as she develops things like reason and impulse control, my daughter’s desires will evolve. Instead of toys, she will be fighting for opportunities, for her voice to be heard, her needs to be recognized, her body to be respected. Fighting doubly hard because she’s a girl. The habits of mind and heart that I teach her now will become the paradigms that shape her relationships with other people, as well as her relationship with herself and all her beautiful, complex emotions.

It’s taken hours of predawn agonizing and dozens of conversations for me to realize that focusing on discipline alone isn’t working, because it’s keeping her negative behavior in the spotlight. So I’ve started to pay more attention to what she’s doing well, rewarding her with small treats when I see her acting kindly, offering a hug instead of a shove. I make an especially big deal of those rare, beautiful moments when she shares.

What my daughter really needs to learn is how to sit with her frustration, to turn her pain into something valuable, and that’s something that I can’t explicitly teach her.

As I began to adjust my response, I’ve noticed my stress levels inch their way down because it feels a whole lot better to nurture my daughter with “yes” than suffocate her with “no.” That doesn’t mean I’ve stopped tracking those chubby fingers, or that she’s completely stopped lashing out. We have good days and bad days when I spend more time imposing consequences than doling out stickers. But we have good days.

And on the bad days, I make sure to stop myself from telling her how to feel or what to feel. Instead, I acknowledge her right to be upset or frustrated over something as ridiculous as a broken cookie or having to wait 30 seconds for her turn on the slide, and try to redirect her hands to something less vulnerable than a child’s face. Do a dinosaur stomp. Beat up on a pillow. Make a lot of noise. Because what my daughter really needs to learn is how to sit with her frustration, to turn her pain into something valuable, and that’s something that I can’t explicitly teach her. I can offer guidance, but ultimately, my girl is going to have to figure that one out alone. And keep figuring it out, every single day for the rest of her life.

I’m learning that the most difficult challenges I face as a mother are those that are tied to the most difficult lessons. My daughter is starting to learn that life isn’t always going to live up to her expectations. That’s not a reason to lash out blindly, but that doesn’t mean she has to be quiet, either. While I want my daughter to understand that there are appropriate and inappropriate ways to use her voice, I don’t ever want her to be ashamed of her voice. I want her to be proud of being outspoken, to know that I admire her for it.

I cannot give my daughter the world that she deserves, but I can raise a woman who is willing to get her hands dirty building that world. And I can say with confidence that my not-so-easy girl is up to the task.