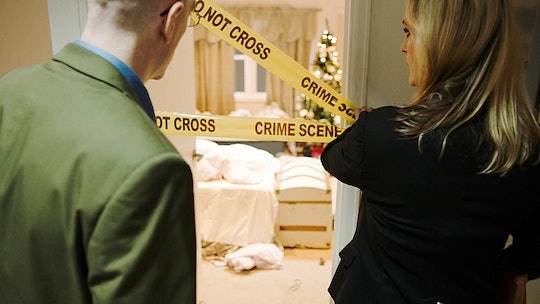 There have been few true crime stories that have left such a lasting impact on America, such as the shocking murder of 6-year-old Ramsey. The image of the petite pageant queen — angelic golden curls and blue eyes — not only haunted the Ramsey family, but the entire country as well. Ramsey's body was found by her father, John, the day after Christmas in 1996. Nearly 20 years later, her murder remains unsolved. A week after the murder, Boulder, Colorado Mayor Leslie Durgin held a nationally televised press conference with updates on the investigation; Mayor Durgin's statement about JonBenét "murderer" was made in an attempt to reassure the residents of Boulder, but her remarks left many skeptical at the time.

Update: In a statement to Romper, Durgin declined to comment on the Ramsey case at length, noting, "As I am sure you appreciate, this is an active, on-going investigation and thus I am not able to make comments, offer my own thoughts or perspectives or participate in the production of any social media, radio or TV show or discussion."

On January 3, 1997, Durgin held a press conference broadcast live via CNN. The press conference was held not only to provide updates, but to respond to statements made by Ramsey's mother, Patsy, in an interview earlier that same week — exclusively made to CNN as well. In the CNN interview, Patsy said "there is a killer is on the loose." At the news conference, Durgin rebutted Patsy's claim, saying: "Boulder is safe." But with the media frenzy surrounding JonBenét's murder ramping up, Durgin's words rang hollow.

People in Boulder have no need to fear there is someone wandering the streets of Boulder looking for someone to attack. Boulder is safe. Boulder is a safe community, and it will continue to be.

There is a killer, but I think the implication, which is completely erroneous, is that there is a murderer walking up and down the street looking for young children.

Additionally, Durgin said she did not believe JonBenét's murder was a random act. What makes Durgin's statements come across as skeptical was that JonBenét's parents, Patsy and John, had not been charged — and thus, had not been officially questioned by police. But just two days prior to Durgin's news conference, the Ramseys appeared on CNN telling their story to the entire country, claiming an outside intruder murdered their daughter.

For Durgin — as a city official — to say that there was no murderer on the loose in Boulder was in direct conflict with the Ramsey's own statements to CNN just days before and further complicated the already tricky case. It was Durgin's press conference that shifted the media narrative of the case with implications of something far more sinister than a child killer wandering the streets of Boulder.