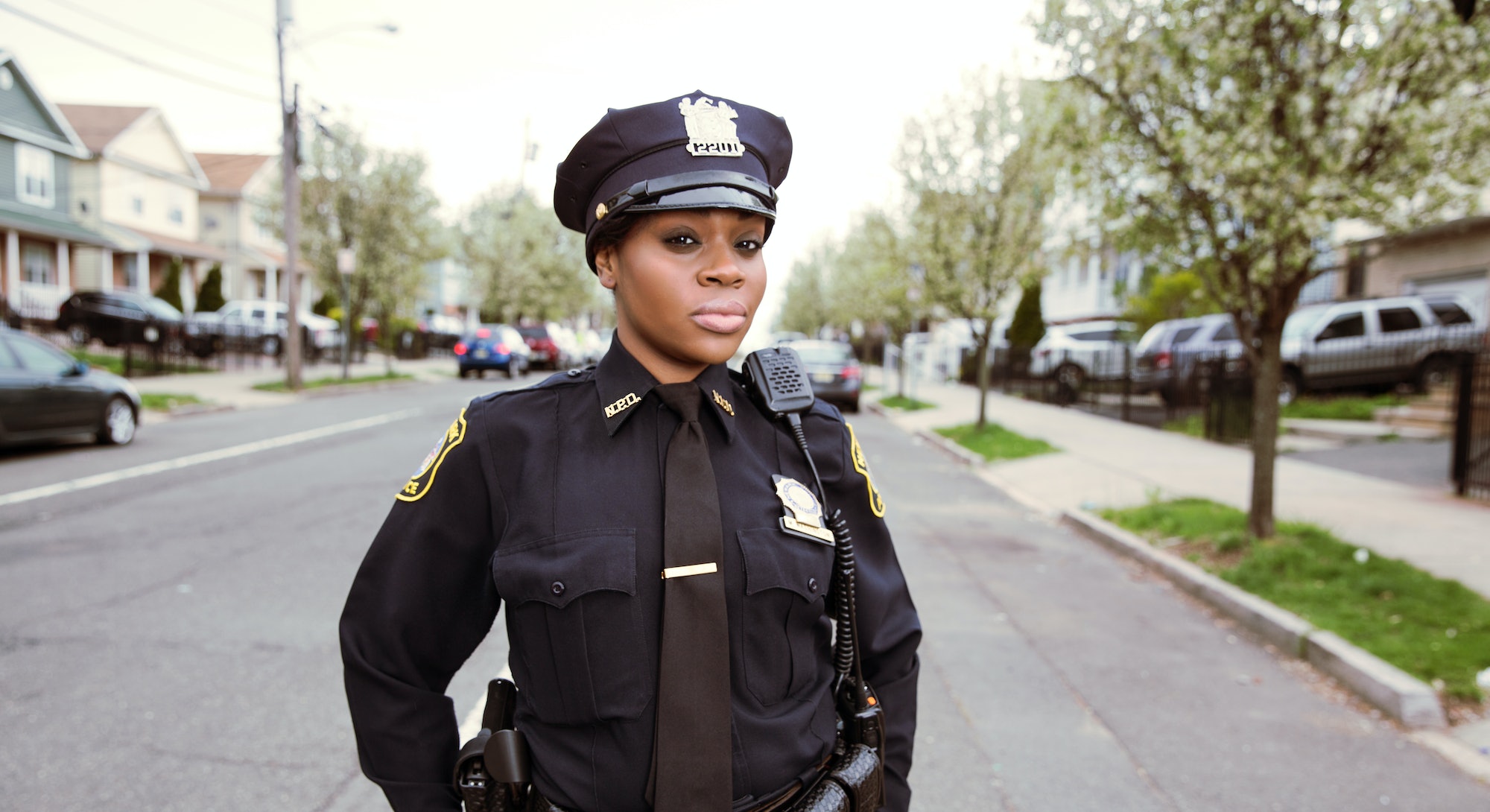 Maysa Washington Took Being An SVU Detective In Stride. Then She Had A Daughter.

Motherhood is inherently unpredictable: schedules change, toddlers tantrum, last-minute meetings are scheduled, someone needs stitches, diaper blowouts happen. On any given day for Detective Maysa Washington of the Newark Police Department, emergencies, trauma, and interventions may also happen. As a member of the special victims unit and mother to a 2-year-old daughter, Washington's day requires a rare combination of physical and mental fortitude that she didn't know she was capable of before she became a mom.

"When you're pregnant you realize how strong you are," Washington tells Romper, as her daughter plays with Legos in the background. "You know how close to death you are, and how painful it is, and when you give birth you know you can basically do anything."

"Men will never be able to do that.

For Washington, 33, the intense experience of having a child — one involving chemical changes, physical changes, emotional, and mental changes — reiterated how strong and capable women are. "Men will never be able to do that," she says. "And I think that's an amazing thing."

That doesn't mean postpartum life was without its fair share of struggles, though. Working in a male-dominated field and having to appear strong on the job and in the streets can put a lot of pressure on a new mom coming to terms with her new body. "Since you're constantly dealing with a danger element, any perceived weakness can be used against you [in the field]," Washington says. "You have to be capable of doing your job in the event that you have to engage in some sort of physical struggle."

Having a strong body has always meant fueling that body and eating as much as I need and want.

Washington typically deals with cases involving sexual abuse and physical abuse, and sometimes those cases involve separating children from their parents or caregivers. In everything Washington does, there's an element of danger that requires her to look and be physically strong, capable, and sure.

So for Washington, healing and regaining a semblance of her former shape was a vital part of reassuming her professional confidence when she returned from maternity leave. "It was important to me to go back to work looking and feeling like my old self as much as possible," she says. "It was a struggle, especially when you think about all you're going through mentally and emotionally, then having to worry about whether or not you're going to fit into your clothes."

For Washington, fueling her body with food that tasted good and fitting back into her uniform played a big part in feeling like her pre-baby self when she was postpartum. "Having a strong body has always meant fueling that body and eating as much as I need and want," she says. "I didn't want to have to worry about buying new clothing or new uniforms or just feeling insecure in myself because I looked and felt like a totally different person." With portion control, eating small meals throughout the day, strength training and working out, and ignoring postpartum diet messages that involve deprivation, Washington was able to avoid spending money on a new uniform and, instead, focus on the challenges ahead.

Especially now that her daughter is a toddler, the biggest of those challenges is to separate her work life from her personal life as much as possible. Working in the special victims unit with assault victims, some the age of her child, has impacted Washington in a way she wasn't entirely prepared for. "Before I had my daughter I don't think it bothered me as much because it was easy to disassociate," Washington explains. "But since becoming a mother, every single time I heard a story about a child, I would put me and my daughter in that situation. I was crying at least twice a month my first year back after having my daughter, because it was so hard to say 'that's not me.'" When she couldn't relate to the parents, as a parent, leaving work at work was an easier task. But now, as a mother with a child of her own, those mind games are becoming increasingly more impossible to play.

That first year I was totally lost and completely consumed by mommyhood and going back to work.

Talking it out, via counseling, has helped Washington erect some healthy emotional boundaries between motherhood and her job. But as any mother knows, compartmentalizing your life is much easier said than done. "To this day I still struggle with that to a degree," she says. "I just have to say, 'That's not me, that's not my daughter, that's not our story, and it won't be our story'." Washington also knows she's lucky to have a supportive partner, supportive family members, and a community she can trust.

Taking time to focus on herself — outside of her job and outside of her family — is also one of the many reasons that Washington is able to do her job at the capacity it requires. "I definitely take time for myself, and I think that's very important," she says, telling Romper that she enjoys music, singing, running, and watching movies. And while her busy schedule often means she feels guilty for dropping her daughter off with a family member on the weekend so she can have some time for herself, Washington knows that maintaining a well-rounded life that fosters all aspects of who she is as a human being allows her to live the life she's built for herself and her family. Especially since, for the first year of her daughter's life, she felt like she misplaced herself. "That first year I was totally lost and completely consumed by mommyhood and going back to work," she explains. "But it's not fair to not take time out for you."

Washington doesn't hide the fact that, as a detective and a mother, embodying both rolls can be difficult. "It's a tough job to perform when you have a child, because it's easier said than done to just not put yourself in certain situations [you come across on the job]," she says. But in so many ways being a detective has informed Washington's role as a mother, and being a mother has informed her job as a detective. Her days might look different than most mothers', but for Washington her responsibilities aren't that different from other women's. She cares for people in need, both at her job and at home, and somewhere along the way tries to care for herself, too.