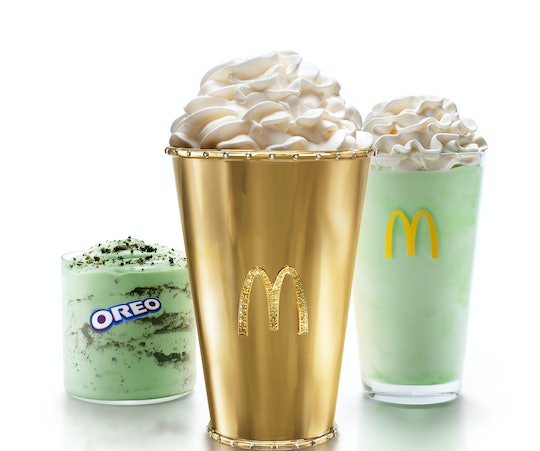 When celebrating a 50th anniversary, nothing beats gold — especially when your corporate logo is The Golden Arches. That's why to celebrate 50 years of its seasonal mint-flavored shake, McDonald's is auctioning off a Golden Shamrock Shake worth $90,000. But this one-of-a-kind collectible isn't just about sipping the fast food restaurant chain's creamy shake in style. All proceeds from the auction will go to Ronald McDonald House Charities.

"Tradition calls for a 50th anniversary to be celebrated with gold, so we wanted to create an item that not only represented this milestone, but our delicious Shamrock Shake," McDonald's Vice President of U.S. Communications Dave Tovar said in a statement. According to the company, the Golden Shamrock Shake cup is hand-crafted from high-polish 18K gold and multiple precious stones.

To mark the iconic shake's 50-year run as one of McDonald's best fan-favorite seasonal desserts, 50 yellow diamonds have been hand-placed within the cup's Golden Arches logo. To mark the shake's mint-green color and creamy whipped white topping, 50 green emeralds and white diamonds were hand-placed around the top and bottom of the cup. What's more, McDonald's has promised the lucky winner will find the lavish cup to be in "mint" condition.

Although valued at $90,000, McDonald's kicked off bidding on its Golden Shamrock Shake on Tuesday at just $1. In just under seven hours, however, bids on the elaborate shake had already surpassed $22,600.