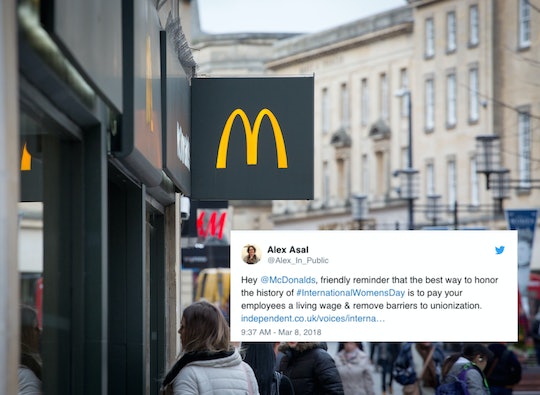 McDonald's got into the International Women's Day Spirit today when it flipped its golden arches to celebrate the women who've chosen the fast food chain to be a part of their story, according to a tweet the company shared today. The company's website suggests that McDonald's recognizes the contributions of women — employees, franchisees, suppliers, community partners and customers alike — and is inspired by women's "strength and leadership." It also notes that six out of 10 restaurant managers in the United States are women who run the McDonald's business each and every day. But Twitter users are calling out the food brand for talking the talk without walking the walk.

McDonald's decision to flip the iconic arches is leaving many people on Twitter wondering why, instead of flipping its logo, it doesn't choose to pay its workers livable wages and support women every day of the year — not just one day when the rest of society is reminded, oh right, women, we should support them. In fact, many people are saying that the W must stand for "wage theft" instead of "women," and they're reminding McDonald's that the best way to celebrate women would be to pay them fairly. It's a wild suggestion, I know.

"What about better pay and a better path of future employment, considering you get more automated every day??" one Twitter user asked. "Paying livable wages > symbolic lip service," another tweeted. "As a woman, thank you. Oh, and pay all your employees at least $15/hour too," another said. And "The W is for wage theft #FightFor15," was just one of the many "wage theft" tweets tossed out there.

Here are some other honorable mentions:

McDonald's did not immediately respond to Romper's request for comment. Of course, the chain does have some supporters on its side. One Twitter user wrote, "This has made my childhood treat relevant again! I will be driving over to the nearest location and support #McDonalds the way it supports women. #InternationalWomensDay."

And another said, "Some of these commenters should try actually watching the video. It's cool that these women own so many franchises and had the opportunity to make their lives better. Good for them!"

They latter tweet is referring to the video that McDonald's links to in its tweet, which tells the story of Patricia Williams, a single mother of two and owner of 18 McDonald's restaurants. She invested all she had to open her first restaurant 30 years ago and now, she employs more than 700 crew members in her 18 locations. Better yet, the locations are owned by her and her daughters, noted the McDonald's website. Her family's story is just one of millions of women's stories McDonald's says it recognizes and celebrates on International Women's Day, according to the company's website.

In 2016, women working full time in the United States were, on average, paid just 80 percent of what men were paid — that's a pay gap of 20 percent, according to The American Association of University Women. While the gap has certainly gotten smaller since the 1970s as more women enter the workforce, the rate of change between 1960 and 2016 means that women are still not expected to reach pay equity with men until 2059. In fact, the progress started slowing down in 2001 and has somewhat stalled over the years — and if it continues to stall, women might not actually reach pay equity until 2119.

At McDonald's, the average worker makes under $10 per hour, according to Fortune. And that wage does not apply to fast-food workers employed by McDonald’s franchisees, which account for nearly 90 percent of the company’s U.S. restaurant employees. The company has 3,100 franchisees who have the opportunity to set their own wage and benefits policies.

So, while McDonald's intentions may have been pure (even though the whole W thing got a lot of Twitter users' hopes up that it was merging with Wendy's), the fast food chain — and most employers — can still do more to actually commemorate hardworking women who deserve it.