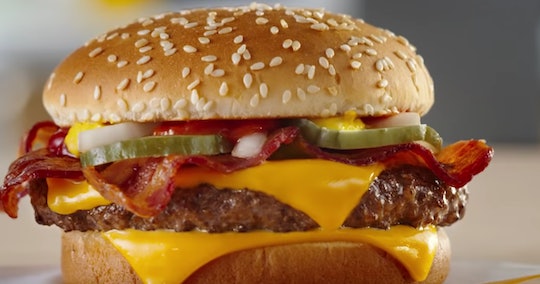 The only thing better than bacon is free bacon. As the age old saying goes, "The best things in life are free." And that could not be any more true, especially when it comes to bacon. It's pretty much a dream come true that McDonald's new promotion includes FREE bacon on anything (and they mean anything).

In less than a week, people will have all of their dreams realized, thanks to McDonald's. On Tuesday, Jan. 29, for a very limited time, customers will be able to add bacon to any menu item they desire for free. From the hours of 4 p.m. to 5 p.m. at McDonald's restaurants, anyone can choose to customize their favorite menu items with the help of bacon strips.

The possibilities are endless. You can get bacon on your burger, McChicken, or french fries — but that's so basic. Why not live on the edge and do something outside of the norm? You can get bacon with your apple pie, on your hot fudge sundae, or on your Filet-O-Fish (too far?).

If anyone ever thought that extra bacon would make their McDonald's experience so much better, now is the time to take that opportunity.

Although some people might be committed to their New Year's resolutions to eat healthier, there should be days where people can eat whatever they want. And technically, they're not cheating on their diet when the bacon is free, right?

And, of course, it seems like kids are always looking for an excuse to go to McDonald's, so this very special day will be the perfect reason to eat a little unhealthy.

Needless to say, people on Twitter are pretty excited to get their hands on some free bacon. And they have the right idea.

There's a reason why people are so obsessed with bacon; a chemical reaction occurs while it is cooked that makes it taste incredibly good and creates a mouthwatering response, according to HuffPost. While four pieces of bacon reportedly contain "nearly half your recommended daily intake for salt," according to HuffPost, it is OK to eat a piece or two every once in a while.

And McDonald's Manager of Culinary Innovation, Chef Michael Harazac, knows this to be true — which is why Harazac is so excited for Bacon Hour. Harazac said in a press release:

I love bacon. America loves bacon. I really can't wait to see the crazy and daring combinations our customers put together.

This free bacon day is meant to celebrate three new additions to McDonald's menu. For a limited time, McDonald's will be selling a Big Mac Bacon burger, Quarter Pounder Bacon burger, and Cheesy Bacon Fries. These menu items will be able to be purchased even after bacon hour is over. So, if people were still craving bacon well past Tuesday, they can get their fix at McDonald's.

While bacon is available on certain menu items at McDonald's, there is an extra charge to put bacon on cheeseburgers year round. So, McDonald's Bacon Hour will have people using their creativity, saving their money, and satisfying their cravings.