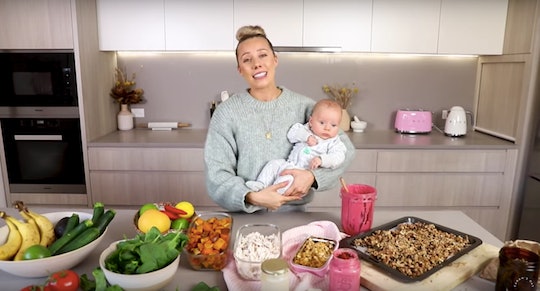 Meal Prep Is A Trick Played On Us By Our Overlords

My favorite thing about Sandra Lee was that she had no qualms about tipping a packet of vegetables into a dish in a shower of icicles, because who has the goddamn time to start from scratch? Her food was "semi-homemade" and I do not object in the least to this neologism. The whole thing was about low expectations and attainability. Take her "Easy Cheesy Scalloped Potatoes," of which the Food Network gloats: "This classic side usually requires lots of peeling and slicing. Sandra makes it stress-free with pre-cut frozen russet potatoes."

Sandra Lee is for people who faffed around too long, forgot to go to the shops, and have nothing but a packet of shredded low-moisture mozzarella and six regenerating potatoes to feed their kids. She is, in other words, the antithesis of meal prep.

Meal prep is a concept that exploded some time around 2013. "The uninitiated may view meal prep as creating leftovers, which has been around for nearly a hundred years," wrote Benjamin Goggin in a retrospective on "meal prep" for Digg. "Meal preppers are quick to distance themselves from leftovers, though." Leftovers are an accident; meal prep is a way of life.

It was born in part of fitstagrammers who chronicled their meal plans on that growing platform, and of course by celebrities, whose endorsements of home-delivered meals and "systems" trickled down to those of us with the broken food processor that only works now if you jam a chopstick in to compress the latch. Laura Prepon published The Stash Plan, a book of recipes, yet much more, in 2016 ("cook ahead / mix and match / nourish body and soul"). Mommy bloggers followed suit with their own plans and inspo on YouTube and Pinterest, because they were already jamming lunch boxes with strawberry rosettes and rabbit-faced apple slices, and what more natural fit could there have been than to take on, in addition, food preparation at an industrial scale?

And here we are now in 2019, with moms across the nation spending their Sundays home roasting their own granola and pickling carrots and vigorously shaking the thin veneer of tolerability left in society along with their tahini x EVOO in a mason jar. Meal prep is tyranny, and I object to the whole plot.

You know what I would like to do, more than spend the scant "free" hours I have left on a Sunday afternoon turning over cubes of medium-firm tofu on an ancient baking sheet? Almost anything else. I would 10/10 rather assemble another KURA step shelving unit, which cost me half my head of hair the last time I tried to get those effing dowels into their companion holes. It sucked, but not as much as tending to an enormous saucepan of eggs on their way to a chemical transition point, soon to be marinated in soy sauce and kept in a filthy stack in our fridge.

Meal prep is snake oil sold to us by the people at the top of society riding their flamingo pool floats while we toil away, wondering why it's so hard, why there's no food in the house, why we don't want to do anything but watch Toby Ziegler self-implode for the eighth time on The West Wing after we survive bedtime. It is, to use a millennial concept that has undoubtedly seen too much soy, a form of gas-lighting. You simply aren't pre-boiling enough quinoa! Cut corn into pieces that fit into small hands! say the meal-prep army of our feeble efforts to survive school drop-off and the poop-scoop shift. Buy more and better Tupperware!

And I almost fell for it! It is alarmingly tempting to believe that I would be a better person if I just had some glass canisters for my lentils and cous cous and sundry other "ancient grains," and could get it together to bake and freeze carrot cake muffins for the busy week ahead.

But no! We need to do less! We need to train our kids to eat from bowls like our cats. We need to cut a Romaine lettuce in half, pour some ranch over, and call it good. We need to, when our children ask what's for dinner, reply, "IDK man, what's good?" When we see a good friend stacking identical rectangles of chickpeas and chicken breast and avocado and despairing cucumber into a tower, we need to grab her by the shoulders and say JANINE, WE ARE GOING TO CHILLI'S TOO AND GETTING TWO-FER MARGARITAS. WE'LL EAT SALMON OFF A PLANK. THERE WILL BE BOTTOMLESS GARLIC BREAD.

Put down the carrots and get yourself a frozen lasagna from Trader Joe's. Microwave for 15 minutes on high. If you stay in the kitchen watching it spin, you can call it semi-homemade.

More Like This
Thanksgiving Recipes Perfect For Little Helpers
Festive Mommy & Me Holiday Nail Ideas To Try
101 Advent Calendar Activities, From Books To Read To Cookies To Bake
Spread Some Christmas Cheer In Your Child’s Bedroom