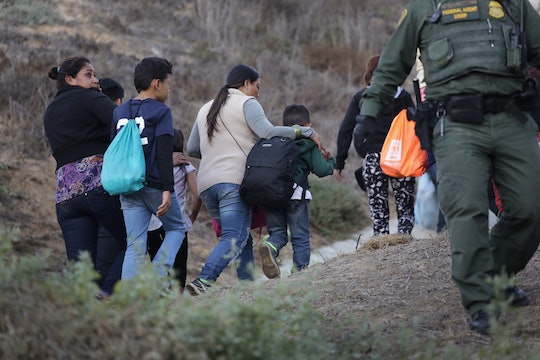 Meaningful Ways To Help Immigrant Families After Another Child Died In U.S. Custody

Less than three weeks after 7-year-old Guatemalan girl Jakelin Caal Maquin died in New Mexico after being detained by U.S. Customs and Border Protection, an 8-year-old Guatemalan boy in custody has also died, according to CNN, after he was initially taken to hospital and diagnosed with a cold. Felipe Alonzo-Gomez died late Christmas Eve after being admitted to a New Mexico hospital with worsening symptoms, and though officials are still trying to determine what happened, the fact that two young immigrant children have died in custody is leaving Americans heartbroken and outraged, and looking for real ways to support immigrant families after another child died.

In a statement following the child's death, CBP Commissioner Kevin K. McAleenan offered his "deepest sympathies" to his family for the "tragic loss," and said that the agency had instituted policy changes moving forward, such as "conducting secondary medical checks on all children" in custody, particularly on those younger than 10," according to CNN.

McAleenan also said, according to the Chicago Tribune, that the agency is looking at additional medical assistance options from other government agencies, and is working with Immigration and Customs Enforcement to come up with alternative custody options like transportation to Family Residential Centers, supervised release, and temporary housing.

As much as all of those changes are likely very much needed, it certainly isn't the first time the agency has been criticized. Following the death of 7-year-old Jakelin, the Congressional Hispanic Caucus called for an investigation, according to NPR, and claimed that "disturbing systematic failures" and too few agents with adequate medical training prevented the young girl from getting potentially life-saving care (Jakelin died of dehydration and septic shock while in government custody after she and her father were apprehended while crossing the southern border, according to NPR). And while the cause of Felipe's death has yet to be confirmed, American Civil Liberties Union Senior Policy Counsel Chris Rickerd told ABC News that the conditions of the detention cells used to hold immigrants are often crowded and "completely unsuitable for children and families."

In fact, just days before Felipe's death, a 23-year-old immigrant mother who was detained Dec. 12 at the border in California told BuzzFeed News that her 5-month-old daughter also became ill in custody, where they'd reportedly been left in "freezing" cells referred to as "hieleras" (aka iceboxes). The woman alleged that she was unable to keep her daughter's antibiotic medication with her, and that when she asked once again to see a doctor, agents told her that everyone coming into the holding cells was ill, and that, as someone detained for crossing the border illegally, she "wasn't in a position to be asking for anything," according to BuzzFeed News.

As infuriating as these stories are, there is unfortunately no easy solution that can solve the problem overnight. At the same time, there are still ways to channel your anger and outrage into something productive, which can hopefully help prevent children from further suffering:

As much as contacting your representatives may seem like a futile exercise, putting pressure on politicians is so necessary. After all, while one single voter may not make much of a difference, when elected officials receive an onslaught of feedback from concerned or angry individuals who are letting them know they won't stand for their lack of action, it builds real momentum that can lead to actual change.

Not sure what to say? The ACLU suggests introducing yourself to the congressional staffer who answers the phone by stating your name and zip code, and then letting them know that you're not willing to stand for mistreatment of immigrant children detained at the border.

The current political climate is one that can easily feel overwhelming — each day, the news seems to bring yet another heartbreaking or fury-inducing story. It can honestly be tempting at times to want to avoid the news entirely, but that's also why it's so important to try and maintain a conversation with others about why we still need to be outraged about the treatment immigrant children are facing. Post about it on social media, talk about it with your friends and family, and encourage them to call their elected officials too.

Although they may face many obstacles providing immigrant children and families with the resources and help they need, there are many organizations on the ground working tirelessly to improve the situation for those who have been detained at the border, and donating to them can make a big difference.

Some organizations to consider supporting include:

As much as it's important to contribute to movements directly helping immigrant families, there are other things we can do as parents to help tackle some of the bigger issues that have left people feeling as though immigrant children don't deserve the same kind of safety and protection that American children do.

Even though it's a long-term strategy that may not have a direct effect on immigrant children right now, by taking responsibility as parents and teaching our kids to be kind and inclusive of others, we can help contribute to the kind of social change we need so that the same kind of anti-immigrant viewpoints won't flourish in generations to come.

If you're a parent, then thinking about children like Jakelin or Felipe dying in U.S. custody is likely gut-wrenching, and it can be emotionally exhausting to carry that feeling around. But letting stories like theirs get pushed by the wayside when new upsetting news stories emerge just makes it harder for necessary change to actually occur. Though it's important to contact your representatives, and support the charity effort while the welfare of immigrant children is making headlines, it's just as important to make it a priority once the news cycle has moved on.