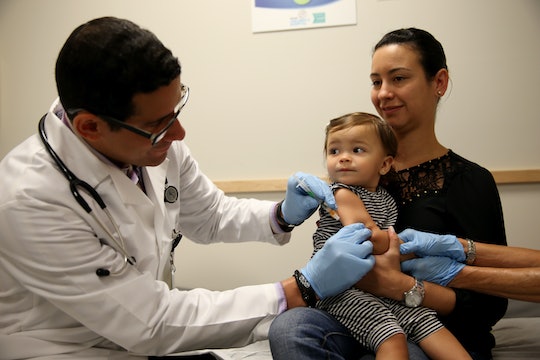 According to the BBC, the World Health Organization has warned that 35 people have died in the last year from measles outbreaks across Europe. The highest number of fatalities, 31, have occurred in Romania. As this latest measles tragedy kills dozens across Europe, parents in the area or those who might be considering visiting might have serious concerns — and for good reason. But there are ways parents can protect their families in light of this unfortunate news.

The BBC reported that a 6-year-old boy in Italy was the most recent fatality in the outbreak, and that more than 3,300 measles cases have been recorded in that country. Numbers like that are scary. It's no surprise that anyone with immunocompromised family members could be worried about visiting as the outbreak continues.

According to Euro News, the young boy from Italy had a compromised immune system as a result of his leukemia, so he likely couldn't get the vaccine to prevent measles. However, he reportedly caught the measles from an older sibling that their parents had decided not to vaccinate. Even if he couldn't get the vaccination, there's a chance he wouldn't have caught the illness that ultimately killed him if those closest to him had received it.

And that's the one way to protect immunocompromised individuals: vaccinating others who can safely receive the vaccines they may not be able to. According to the Huffington Post, there is potential for large outbreaks to occur "wherever immunization coverage has dropped below the necessary threshold of 95 percent." In layman's terms, the more people who are covered, the less chance the disease has to spread, and the less chance it will infect a child who, for whatever reason, can't get the vaccine to protect against it.

The fact that the disease is spreading due to lower coverage rates is heartbreaking and so unnecessary. As Dr Zsuzsanna Jakab, the WHO regional director for Europe, told the BBC:

Every death or disability caused by this vaccine-preventable disease is an unacceptable tragedy.

And making sure others closest to immunocompromised children or other person in a family is just one way to try to prevent a real tragedy from occurring.

Parents can also check the vaccination rates in their local area, or areas they plan on visiting with immunocompromised children. The Centers for Disease Control and Prevention reported that, although extensive use of measles vaccines has resulted in a greater than 99 percent reduction in measles cases when compared to the pre-vaccine era in the United States, measles is still common in other countries. And when unvaccinated people get measles while abroad, they can then bring the disease back to the U.S. So looking into the vaccination rates before traveling could be an added safeguard for parents.

But it's not a bad idea to check on rates in your local area, as well. In fact, when a measles outbreak occurred in California in 2015, the Sacramento Bee reported that the CDC recommended that parents of young children check vaccination rates right at their kid's school. Because even if this latest measles tragedy is happening in Europe, that doesn't mean it couldn't happen anywhere in the U.S. parents have decided against vaccinating their kids.

According to the Huffington Post, there are places in Europe that have strict rules in place when it comes to vaccinations. For example, the outlet reported that in Germany, kindergartens have to notify health authorities about parents who can't prove they have been "counseled" on child vaccination.

So how did this outbreak even happen? For one, those sorts of regulations aren't in place or enforced everywhere in Europe. In England alone, around 24,000 children every year are at risk of measles, mumps, and rubella as a result of not being immunized, according to The Independent.

And in Italy, more than 130 families are allegedly threatening to "seek asylum" over in Austria, according to the Huffington Post, following the signing of a decree by the Italian president that requires mandatory vaccinations for school admission. It's anti-vaccination individuals like these and groups they might be a part of that are partly to blame for recent measles outbreaks, according to Live Science.

The truth is, parents can do everything they can to protect immunocompromised family members — from making sure other family members and those closest to them are vaccinated, to checking area vaccination rates at home or while they're away — and those family members could still catch measles because of other people who are not vaccinated.

It takes a village, as they say, and in this case, the more immunized the village, the more chance it has of protecting its most vulnerable members, and preventing more tragedies like the current measles outbreak in Europe.