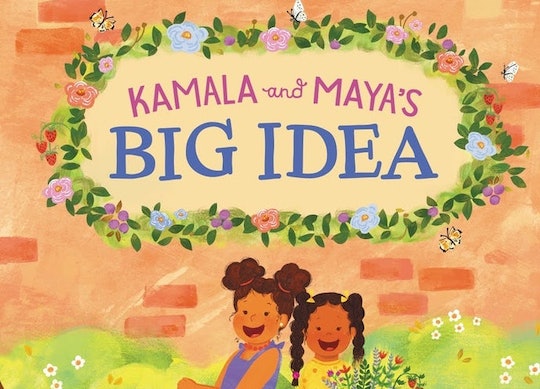 The true story of how Kamala Harris and her sister Maya came together as young girls to make a difference in their community can soon be the bedtime story that inspires your own children into action. Phenomenal Woman Action Campaign Founder and CEO Meena Harris has written a children's book based on a true story from her mom and aunt's childhood. Kamala and Maya's Big Idea details how the two Oakland, California natives turned an unused apartment courtyard into a fantastic play area for local children.

"Growing up I loved hearing stories about and seeing old pictures of my mom, Maya Harris, and aunt, Kamala Harris, as young girls in the 1970s," Meena says in an author's note. "A specific story from their childhood always stuck with me, how they worked together to turn the unused courtyard in their apartment building into an area for kids to play... By the time I had two daughters myself, I knew I had to write a book inspired by that story."

Set to be published by Balzer + Bray, an imprint of HarperCollins Publishers, Kamala and Maya's Big Idea is about more than just one story from Kamala and Maya's childhood. "It was an early lesson on the power of organizing, and an example of what my grandmother, Shyamala Harris, a scientist and civil rights activist always reminded us: each of us has a part to play, no matter how small," Meena says.

In an Instagram post announcing the book, Meena described it as the story of how "two sisters make a difference in their community by dreaming big, organizing across diverse groups, and fighting for what they believe in."

With colorful illustrations by Ana Ramírez González, a Pixar artist who worked on the film Coco, the book has already received high praise from women who, like the Harris sisters, spend their lives advocating for change within communities. Sen. Elizabeth Warren, for example, called the book "an inspirational reminder to choose courage over fear" and "a must read for little girls around the world" in comments provided by Phenomenal Woman. "Kamala and Maya’s Big Idea teaches a powerful lesson: if you're willing to fight with everything you've got, no dream is too big."

Stacey Abrams also described Meena's book as "a simple but moving lesson on the power of organizing will resonate for this next generation of young leaders," promising the "inspiring tale" will show children "the art of the possible when cooperation and imagination meet determined young minds."

While Kamala and Maya's Big Idea centers around main characters that are young girls of color — an underrepresented group in children's literature — it's not a book just for girls. In fact, while the book is directed at all children ages 4 to 8, the team at Phenomenal Woman have promised it's a book designed to inspire all ages.

"I was so lucky to grow up with such strong female role models — my grandmother, my mother, and my aunt," Meena says. "I hope this book inspires a new generation of activists to know that they can be effective agents of change if they think creatively, engage their communities, and never, ever give up."

Kamala and Maya's Big Idea (Balzer + Bray) is expected to hit bookshelves on June 2. Until then, the book is available for pre-order from 11 independent bookstores scattered across the country or from HarperCollins, Amazon, Barnes & Noble, IndieBound, and Books-A-Million.

More Like This
Cardi B Issued A Hilarious Warning For Anyone Who Tries To Touch Her Gift From Beyoncé
Zaya Wade Is Rocking New Long Hair & As Gabrielle Union Put It, She's A "Vision"
Abbott Elementary's Sheryl Lee Ralph Received A Beautiful Gift From Beyoncé
Little Black Girls Are In Awe Of Halle Bailey In The Little Mermaid