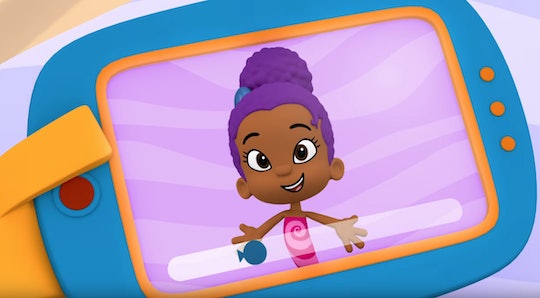 Bubble Guppies is ready to make a splash with its Season 5 premiere on Sept. 27, bringing kids new exciting underwater adventures to dive into. Along with featuring a number of celebrity guests, the new season comes with a huge surprise that will leave little ones dancing in their seats. Bubble Guppies Season 5 introduces a new guppy named Zooli, as seen in this exclusive clip. And she's bound to be a delightful addition to the show.

In the clip, Mr. Grouper gathers the class — including Gil, Molly, Goby, Deema, Oona, Nonny, and Bubble Puppy — and tells them he has really exciting news. “Today is a special day,” he says with his charming fishy smile. “We have a new student joining our class.” When Molly sweetly asks if the new student is a boy or a girl, Mr. Grouper confirms she’s a girl, and that her name is Zooli.

Upon the guppies' excitement, Mr. Grouper pulls out a tablet and shows them a video Zooli sent for the class. “Hi everybody, I’m Zooli, and I can’t wait to be in your class,” says the adorable new student in school. “Here’s some things about me. My favorite color is purple and I love animals, especially animals that live in the ocean. And my most favorite ocean animal is a seahorse. See you soon!”

In a press release, Nickelodeon describes Zooli as a spunky and smart student who’s going to be a “fin-tastic” new friend to the guppies, and she’ll be there to join them as they play, sing, dance, and discover valuable new lessons during their fun and educational adventures.

The new season kicks off with "The New Guppy!," in which the guppies face-off with the Sea Witch — voiced by Unbreakable Kimmy Schmidt, The Princess Bride, and Taxi actress, Carol Kane. After the Sea Witch takes the guppies’ magical jewels and tries to become the ruler of the Seven Seas, the guppies put their ideas together and try to figure out how to stop her.

With so much excitement coming their way — along with the show’s soundtrack of catchy, educational pop songs and its math, literacy, arts, science, and socio-emotional development infused curriculum — there’s no doubt kids and parents will wholeheartedly enjoy the new season of Bubble Guppies. And I’m sure as the season progresses, kids will begin to fall in love with Zooli. With her indigo colored hair and pink spiral tail, she’s an adorable new addition to the series, and it’s probably just a matter of time before children begin asking their parents for Zooli-themed dolls and toys.