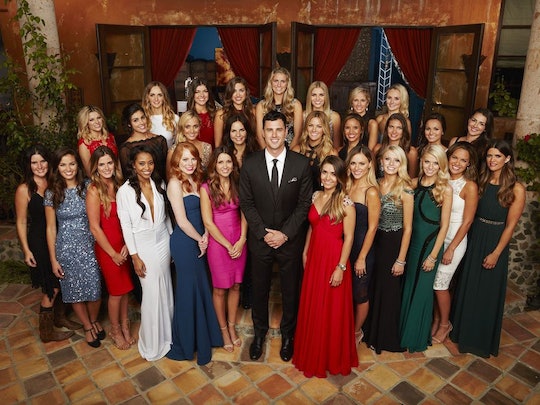 On January 4, 2016, The Bachelor returns to ABC for it's 20th season. (Really?!) This season will follow Ben Higgins — the man who grew up in Indiana, currently resides in Denver, Colorado, and was "let go" by The Bachelorette's Kaitlyn Bristowe. And while fans were heartbroken when Bristowe let him go, it also ended up being good news for us (because now he's back, for another 13 weeks — oh, and he's still looking for love. But Higgins is only one part of the equation. So without further ado, here is what we know about the 28 women vying for a chance to marry Mr. Higgins:

Amanda is an esthetician from Rancho Santa Margarita, California. She is the mother of two little girls — her self-proclaimed greatest achievement to date — and she loves Nutella and peanut butter. (But seriously...who doesn't!)

If Amber looks familiar, that's because she is (well, if you are a fan of the series she is). Amber — a 30-year-old bartender from Chicago — appeared on Bachelor in Paradise Season 2. She is back, and hoping to hit it off with Ben.

Becca is also returning to the series for a "second shot at love." (She almost won Chris' heart just last season.) The 26-year-old chiropractic assistant currently lives in San Diego.

Breanne is a 30-year-old nutritional therapist from Seattle. She loves the music of Lana Del Rey, Lady Gaga, Beyonce – "incredible [and powerful] women who love themselves and are confident [enough] to share their gifts with the world!" And, according to Reality Steve, she has been married — and divorced — twice.

Caila is a 23-year-old software sales representative from Ohio, i.e. she has the same job as Ben. Match made in heaven? We shall see...

Like many sisters, these 22-year-old twins do everything together (including "chasing after" the same man). The are both big fans of country music — though Haley also likes some alternative stuff. Oh, and did I mention they are both vying for Ben's heart? Yeah. This should be interesting, to say the least.

Isabel, aka "Izzy," is 24-years-old. Currently, she works as graphic designer in Connecticut.

Jackie is a 23-year-old gerontologist from San Francisco, i.e. a health care professional who works with elderly patients. According to her bio, she cannot live with her "Bible...[her] stuffed giraffe [named] "Fergus," floss, chocolate and my [her] running shoes."

Okay, so here's something I didn't see coming: Jami is friends with Kaitlyn Bristowe, aka the woman that broke Ben's heart last season. Like Kaitlyn, Jami from Canada, and the 23-year-old works as a bartender in Alberta.

Jessica is a 23-year-old accountant is from Boca Raton, Florida. She likes to listen to Luke Bryant, Kygo, and Lil’ Wayne – the "best rapper alive."

24-year-old Joelle, aka "Jo Jo," is from Texas. In a recent interview with Yahoo, Chris Harrison — the show's host — shared Jo Jo has recently gone through a breakup and has had a hard time letting go.

Jubilee is a 24-year-old war veteran from Florida. According to Harrison, Jubilee is a "strong, bold, loyal" woman from Haiti, and "Ben is impressed with her story as he gets to know her." Oooooooo!

Lace hails from Denver, Colorado (aka, where Ben is from). She is a real estate agent, and while she lives in the notoriously cold "Mile High City" she prefers hot weather, and pools. She is 25-years-old.

Lauren Barr (or "LB") is a 23-year-old fashion buyer from Oklahoma. Her fav movies are Love & Basketball, Pretty Woman, and The Parent Trap.

Lauren B. is a flight attendant in Marina Del Rey, California. She is 25-years-old and "love[s] love."

Lauren H. is a 25-year-old kindergarten teacher from Michigan. According to her bio, Lauren's favorite date — of all time — "was going to the grocery store with a guy." So don't worry, Ben; I think you'll be alright.

Another Lauren?! (No offense, Lauren R. but this is a little crazy.) Anywho, Lauren R. is from Houston, Texas, and the 26-year-old math teacher loves Harry Potter and the Batman movies.

Like Lace, Leah is also from Denver, Colorado. She is a 25-year-old event planner and would like to be Ariel if she could be a fictional character because "Who wouldn't want to be a mermaid?!"

Meagan is a self-proclaimed "cowgirl" from Weatherford, Texas. When asked if she could be any animal — and why — she replied: "Kangaroo. They kick ass. Literally." She is 30-years-old.

At 28-years-old — and after obtaining her doctorate in dentistry — there aren't many things that scare Mandi but, admittedly, she is afraid of "falling in love and having my heart broken." Mandi is a dentist in Portland, Oregon.

While originally from Austin, Texas, Olivia, 23, currently works as a news anchor in Virginia, but originally hails from Texas. She loves Titanic, The Shawshank Redemption, and Anchorman, and "hot chocolate, scarves, flannel sweaters and cuddling."

Hailing from Little Rock, Arkansas, Rachel loves Christmas. And while the 23-year-is currently unemployed, she is spending her "down time" looking for the man of her dreams. Will Ben be "the one?"

At just 26-years old, Samantha is already an attorney — graduating from law school in the top 20% of her class. She is from New Smyrna Beach, Florida, and her biggest "date fear" is "awkward silence."

Shushanna is a 27-year-old mathematician from Salt Lake City. She told ABC her favorite childhood memory is "playing checkers with my [her] grandfather." She also shared she loves to cook.

This 27-year-old "chicken enthusiast" — whatever that means — is from Redmond, Washington. (Seriously. According to ABC.com, that is her occupation.) Amanda also likes rap music, techno music, and country music — though the later is only on certain occasions. Like chicken wrangling?