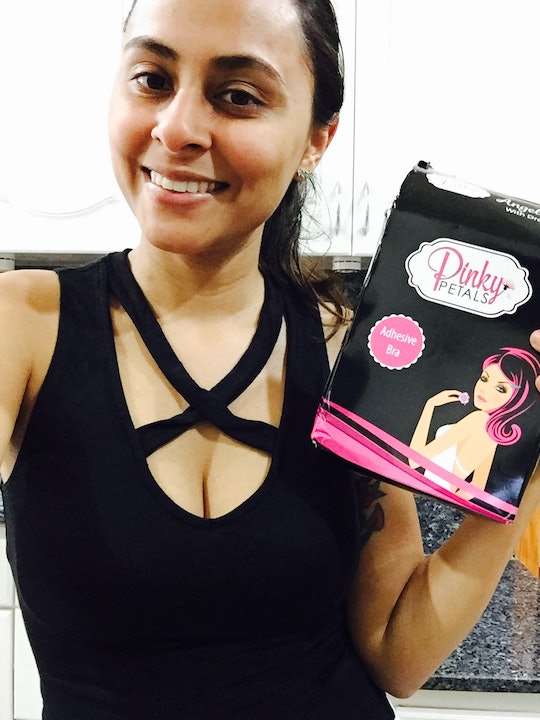 Meet The Bra That Saved Me Post-Baby

It’s no secret that a woman’s body changes a lot during pregnancy and postpartum. I had anticipated the stretch marks, weight gain, and hormonal swings. But I didn't expect how much my breasts would permanently change after giving birth. It took a lot of searching, but eventually I found the sexy bra that saved my boobs postpartum.

My boobs didn't change much during pregnancy. I knew they might sag when I was nursing, but I naively expected that they would go back to “normal” after I stopped. I wasn’t able to breastfeed because of latch issues, so I ended up exclusively pumping for a year. I looked forward to ditching my nursing bras and I couldn't wait to wear my pre-pregnancy bras.

But when I finally tried my pre-pregnancy bras on, they no longer fit properly. My breast looked like deflated balloons. They were no longer perky and firm; instead, they were small and droopy. My breasts didn't fill my bras as they had before, which meant the tops of my bras were loose. I hated that they no longer fit, but I tried to look at it as a perfect excuse to go on a shopping spree.

I went to a few of my favorite lingerie stores. Before my pregnancy, I'd never needed any help or assistance while shopping, because I knew what types of bras and what sizes were best for me. But as I browsed around, I felt like a fish out of water, and when I explained my situation to the employees, they looked mortified. I realized that most stores don't cater to postpartum women, who frequently experience breast changes after delivery.

No matter what kind of bra I tried on, my boobs looked awful.

The employees suggested a few push-up bras, but they were heavily padded and uncomfortable. Still, I bought a few of them, hopeful that at least one would fit properly. But none of them did. When I got home and tried on my new bras, I soon found out that no matter what kind of bra I tried on, my boobs looked awful. The bras were either too tight in some areas, or too loose in others. So I wore the bras that I had and just tried to hide behind looser fitting tops.

Shortly afterwards, I kept seeing this bra pop up on my Instagram feed. It was called "The Sneaky Vaunt Bra". It's a strapless, backless, adhesive bra — definitely something I would have worn prior to having a baby. But I ignored it. It just didn’t seem like it would be a practical option for me.

One night, I was scrolling through my Instagram feed when I saw the bra taunting me once again. I don't know if it was bravery or sleep-deprivation that prompted me to make the online purchase, but I ended up buying it. I found a cheaper version on Amazon, and I thought “Why the hell not?”

When the bra arrived a few days later, I tossed the box to the side. I figured it would be just as disappointing as the bras I'd tried on in stores, so I didn’t even want to open it. After about 2 weeks, I figured I should finally try it on. It was now or never.

I put on the bra and adjusted the drawstring in the front. Then I tried on a shirt that I have been dying to wear since I stopped pumping. Bam— just like that, I looked like my old self again.

When I opened the box, I have to say, the bra didn’t look very attractive. If I had seen it in stores, I probably wouldn’t have even noticed it. But I decided to give it a try. It’s really simple to put on: you just slap the cups on, pull the drawstring in the front, and adjust the bra to the level of cleavage you desire. The best part was that it was customizable and adjustable, so if you have lopsided breasts, as I do now, you can place the cups higher on one side and lower on the other.

Depending on how much lift, cleavage, or support you need, the bra can be adjusted to suit your look. I needed a slight lift, but I didn’t want anything too over the top. I wanted something that was between modest and sexy (if that even exists). I wanted to look natural. I wanted to look like my old self again.

I put on the bra and adjusted the drawstring in the front. Then I tried on a shirt that I have been dying to wear since I stopped pumping. And bam— just like that, I looked like my old self again.

I have had other bras with adjustable and removable straps, but they were complicated and I usually lost the accessories. I love the fact that I can wear this bra with any outfit without having to worry about straps showing, which makes it perfect for the summer. The bra also gave me the lift I needed without the hassle or discomfort of an underwire.

Although I don’t think this bra will last years and years (I assume that eventually, the adhesives on the cups will become less effective), I don’t regret purchasing it. I’m now able to wear all of the outfits I want, and I feel great in them. I don’t feel like a mom recovering from a year's worth of pumping. I just feel like myself again.