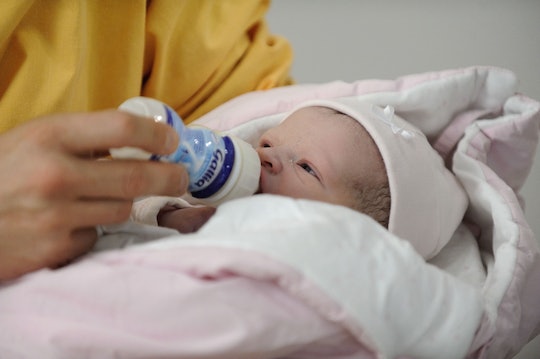 Meet The Moms Who Feed Their Babies Donated Breast Milk

When she gave birth to her daughter, Portia Brodie Zwicker, 35, had every intention of breastfeeding her. But when she tried to nurse her baby, she experienced a surprisingly common problem: her daughter never latched.

“I saw a few lactation consultants while in the hospital and a private one afterwards,” Zwicker, who is based in upstate New York, told Romper. “She had laser surgery for lip and tongue tie, but that still didn't help. I pumped for about three months and bottle fed her. Then I got lazy with the overnight pumping and lost my supply. I've always felt guilty since.”

Unable to breastfeed her daughter, Zwicker struggled with guilt about bottle feeding her baby. She was faced with a conundrum: as a mom who wholeheartedly believed the slogan, "Breast is best," what did that mean for mothers like her, who weren't able to nurse their baby?

The American Academy of Pediatrics (AAP)'s guidelines suggest that exclusive breastfeeding is the safest and healthiest option for babies during the first six months of life. Yet an estimated 35 percent of mothers wean before that because they believe their milk supply is low, according to the Journal of Nursing Scholarship. After endless pumping, experimenting with supplements like fenugreek or fennel seed and creating cookies from known galactagogues, or foods that are known to increase milk production, many desperate moms like Zwicker are looking for one more chance to give their child breast milk instead of formula.

Although there's been endless debate for decades over the merits of breastfeeding versus formula-feeding, these days the slogan "breast is best" is something of a mantra for new moms. Yet while 79% of mothers take this mantra to heart by initiating breastfeeding immediately after birth, according to the most recent Breastfeeding Report Card by the Centers for Disease Control and Prevention, that number falls steadily from day one. In fact, only 40% of babies are exclusively breastfed until they are six months old, according to UNICEF.

For many moms, that isn't for lack of trying. In fact, 5% of mothers have a medical condition prevents them from producing breast milk, such as forms of breast cancer, according to the American Academy of Pediatrics. Additionally, countless mothers without such medical conditions may be limited by environmental factors, such as difficulty with latch, poor breastfeeding education, or a lack of support from their employer or significant other.

As someone who used donor milk to feed my own daughter, my inability to produce enough milk for her on my own was prompted mostly by work difficulties. Due to my demanding work schedule and my difficulty pumping enough milk for my daughter while I was away during my 14-hour shifts, I had to seek other options. Being able to secure breast milk to supplement my own supply, in addition to what I was pumping, enabled me to continue nursing my daughter when we were together.

There are four ways that donor milk is distributed to babies in need. Some milk is donated directly to a hospital for use in the neonatal intensive care unit (NICU) to be used for premature babies whose mothers are struggling to pump enough before they are able to breastfeed. Others may chose to sell their milk to a for-profit bank like Medolac or to sell online by placing an ad on Craigslist or sites that facilitate for-profit milk sharing, such as Only the Breast. Some moms may simply give their milk to a friend or directly to a mom they connected with through an altruistic, peer-to-peer milk sharing program such as Human Milk 4 Human Babies or Eats on Feets.

The use of donor breast milk isn’t without controversy, specifically when a mother uses online services or peer-to-peer milk sharing to obtain donor milk instead of utilizing a milk bank that screens and pasteurizes all donated milk.

One 2013 study found significant microbial contamination in breast milks samples purchased online, concluding that mothers should avoid use of donated or sold breastmilk and suggesting further use of lactation services as the solution to increasing breastfeeding rates. Last year, a study published by Pediatrics caused an uproar when it was found that 10 of 102 donor milk samples tested contained bovine DNA, suggesting the donation had been mixed with an estimated 10 percent of cow’s milk.

“FDA recommends against feeding your baby breast milk acquired directly from individuals or through the Internet,” their website warns. “The donor is unlikely to have been adequately screened for infectious disease or contamination risk. In addition, it is not likely that the human milk has been collected, processed, tested or stored in a way that reduces possible safety risks to the baby.”

Yet some believe the FDA and the studies warning against use of breast milk donation aren't telling the whole story.

In a statement sent to Romper, Emma Kawsnica, a representative at Human Milk 4 Human Babies, a peer-to-peer milk sharing cooperative serving roughly 50,000 parents worldwide, said the result of the study would likely have been different had they examined altruistic milk sharing, or milk that was donated out of good will and a desire to help other women instead of motivated by a desire to profit from the sale of breastmilk.

Organizations like HM4HB tend to encourage mothers to get to know their donors by asking them questions about their diets, the medications they take, and their methods for storing the milk, due to the belief that building trust between donor and recipient lowers the risk of contamination. Yet "only anonymous sales were included in this study,” the HM4HB website pointed out. “Anyone who attempted to find out information about the recipient baby or establish a personal relationship with the recipient was dropped from study participation, with all contact ceasing.”

"Basically, all of the things which we feel REDUCES risk were not replicated in the study methodology," Kawsnica said.

Aunchalee Palmquist, an assistant professor of anthropology at Elon University, also told Romper that, unlike the online purchase of breast milk, in peer-to-peer milk sharing most recipients are screening their donors. In fact, according to a paper Palmquist authored about online milk-sharing, 96% of recipients met their donors face-to-face before accepting donated milk.

So who are the woman accepting and donating breast milk? That's a complicated question.

In her paper, Contextualizing online human milk sharing: Structural factors and lactation disparity among middle income women in the U.S for the journal Social Science & Medicine, Palmquist points out that women involved in online milk-sharing are largely middle class. However, there is a significant income disparity between donor and recipient, with donors reporting a median annual income of $72,500 versus recipients' annual income of $57,500. Donors also reported having received more breastfeeding support from both family and health practitioners, as well as higher education levels. These figures track with national statistics about breastfeeding: according to data from the Centers for Disease Control, high-income mothers are significantly more likely to breastfeed than low-income mothers, with 74% of the former group breastfeeding versus 57% of the latter group.

Palmquist's study also found that it isn’t only biological mothers who are seeking out donor milk. Transgender parents and non-biological parents also receive breast milk donations, although further research needs to be done to determine at what rates.

We did try formula, but she did not tolerate it well, and it made me an emotional wreck.

Aside from a lack of social support, many of the recipients of donated breast milk have faced a significant obstacle that prevented them from exclusively breastfeeding their child.

Kerrisa Williams, a mother of two, told Romper that a medication she has to take for restless leg syndrome, as well as her baby’s long stay in the NICU after she gave birth at 32 weeks, prevented her from exclusively breastfeeding.

“We started using donor milk as a supplement for maybe 1-2 bottles a day around two months because I wasn’t producing enough,” she told Romper. “A month later, when my daughter was a little over 3 months old, my supply started tanking even more. I found out a week later I was pregnant. My supply is virtually nonexistent now, 2 months later, so my daughter is fed 100% donor milk. We did try formula, but she did not tolerate it well, and it made me an emotional wreck because formula simply is not my choice.”

No matter what the cause, new mothers who are struggling to breastfeed often feel guilty opting for formula, even when they have done everything possible to promote a healthy breastfeeding relationship. So despite the warnings of agencies like the FDA, they're eager to receive breast milk from moms who produce too much of it — and they're not super concerned about the potential risks.

“I have received criticism,” Kerissa told me. “I don't have any fears or worries. These are moms feeding their own babies with the same milk. Pumping is also such a huge commitment and pain in the butt. It's not like it's a hobby that someone would take up if they weren't super passionate about helping other babies, not hurting them.”