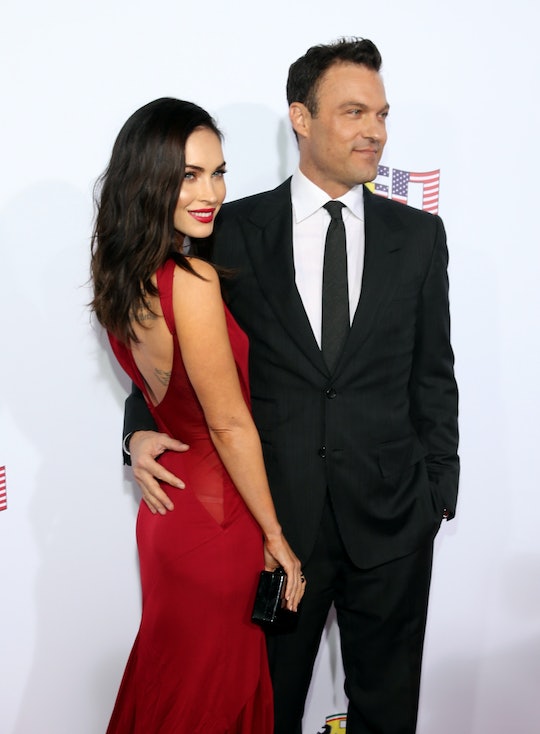 It's a boy! On Tuesday, E! News reported that actress Megan Fox had given birth to baby number three with husband Brian Austin Green. The new arrival joins brothers Noah, 3, and Bodhi, 2.

According to E!, the little one's name is Journey River. Fox's publicist did not immediately return a request for comment.

The happy news comes on the heels of a tumultuous year for the couple. Last summer, Fox, 30, filed for divorce from 43-year-old Green, citing irreconcilable differences and requesting joint custody for their two sons, according to People. In response, Green filed for spousal support a few months later in September. For the time being, it seemed things were winding down.

Then in April, sources reportedly close to the couple confirmed to People that Fox was expecting, putting an end to the rampant speculation and discussion over who the child's father was. At an event in Las Vegas to promote her film Teenage Mutant Ninja Turtles: Out of the Shadows, Fox stepped onto the red carpet to show off her adorable baby bump.

"Of course Brian is the dad," the source claimed. "They never stopped loving each other and they will never stop being devoted parents to their boys." The source then added that the divorce proceedings had allegedly been brought to a standstill, given the impending addition and that Fox and Green were "continuing to work on their marriage and are living together again."

That same month, E! News spoke with a source also reportedly close to the couple who claimed,

Brian and Megan been working on themselves as individuals and things have gotten better between them as a couple. They have been getting along great. They are best friends and know each other very well. They admire each other on how they are as parents and are looking forward to bringing their third child into this world.

The source added that Fox was especially thrilled for the new bundle of joy. "Megan's favorite thing is being a mom and spending time with her family," the source claimed. "[She's] feeling happy and healthy and is working out and taking it easy."

Given just how busy the actress has been of late — filming and promoting the Teenage Mutant Ninja Turtles sequel, and taking up a recurring guest star role as Reagan in Fox's New Girl, which earned her rave reviews — it's a wonder Fox had anytime to get anything else into her daily routine. Either way, she's taken it all on like a pro.

With the arrival of baby Journey, Fox and Green are embarking on yet another adventure together. Considering how well they've managed the whole parent-game up until now, it's a safe bet they'll carry this one off with ease.