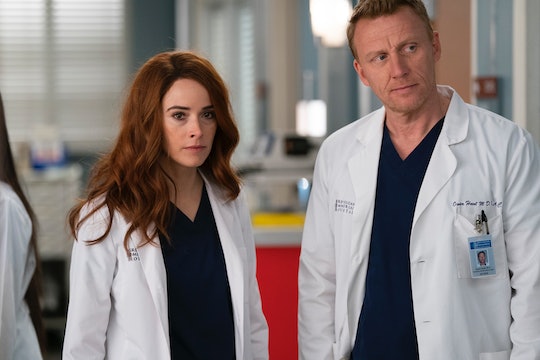 The last time Grey’s Anatomy fans saw Megan Hunt, she had just returned after being M.I.A. in Iraq for 10 years and she was reuniting with her former fiancé, Nathan Riggs. She then got something very rare in the Grey’s universe — a happy ending. But in tonight’s episode, Megan returns to Grey’s Anatomy and chances are, she will have some thoughts about Teddy and Owen’s arrangement. She served as a trauma surgeon in the U.S. Army the same time Teddy and Owen served, so she has always been very close to her brother’s best friend.

After she arrived in Seattle in Season 14, she spoke to Teddy, Owen, and her mom about Owen’s marriage to Amelia at the time and said that she didn't feel they were right for each other. Like everyone else who has followed Owen’s relationships over the past several seasons, Megan said that she thought he belonged with Teddy. It also helps that Megan herself was pretty close to Teddy while they served the Army as surgeons years ago and that she barely knew Amelia at the time.

So when she drops in on her big brother in tonight’s episode, she will probably have similar thoughts, especially since there are clearly some romantic feelings lingering between Owen and Teddy.

Honestly, Megan's return to Grey’s Anatomy, even if it’s for this one episode, could be the push that Owen and Teddy need to finally be together and stop all of this will/they won't they nonsense. Owen has essentially kept Teddy in his back pocket since before he was with Cristina and that was a long time ago in Grey’s world. They have never gotten the timing quite right and she’s happy with Koracick right now, but Megan might be here to knock some sense into both of them to decide once and for all if they are going to be together.

When Abigail Spencer, who plays Megan, tweeted a photo of herself sporting her Megan Hunt red hair, she didn't give any details on why Megan is returning to Grey’s. But I can only assume that it has more to do with propelling Owen’s story forward, especially since Megan’s story was tied up with a pretty neat bow the last time we saw her.

Earlier this season, Kim Raver, who plays Teddy, spoke with Entertainment Tonight about what’s in store for Teddy and Owen and she admitted that Teddy has loved Owen for a long time, but that doesn't necessarily mean that Teddy and Owen are endgame.

"Does Teddy want to be alone? No. Has she deeply loved Owen for a really long time because she’s had great loss in her life? Yes. Will she be fine in the end? Yes," Raver said. "But what makes it so interesting is that we are searching for a relationship, but a modern concept is: We’re also fine on our own and I think we’re actually better partners when we do become stronger alone. Maybe that is the journey. Maybe Teddy is gonna be alone, I don’t know."

One of the big takeaways the last time Megan was on Grey’s Anatomy was her own love for Teddy and confusion that Teddy and Owen still hadn’t gotten together in the 10 years she’d been gone. I don't expect her to be any less honest when she reunites with Teddy and Owen again tonight. Now that she has found her own happy ending, she is more than likely going to be as upfront as possible about Teddy and Owen getting together. Megan definitely isn't subtle and her return to Grey’s could either make or break Teddy and Owen as a couple.