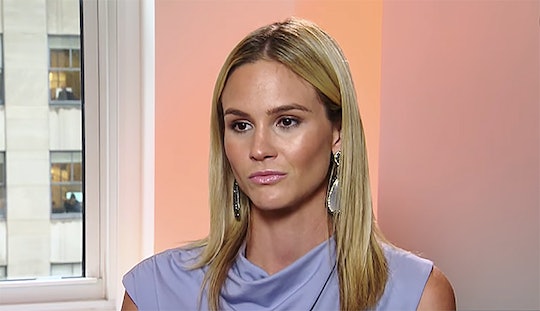 This Real Housewives of Orange County alum has never shied away from discussing hard truths, whether it be about her marriage or her toughest parenting moments. And Meghan King Edmonds' blog post about raising "differently abled" twins falls in line with her open personality, as she got incredibly real about the difficulties of her situation.

Edmonds said that she always knew something was different about Hart, even from the moment he was born. "The nurses struggled to straighten his legs to measure his length. He suckled hard, shallow, and often until I bled and he spit up black," she said in another blog post entitled, "My Hart."

Following her intuition, Edmonds pushed hard to find answers, and after an MRI, Hart was diagnosed in June 2019 with Periventricular Leukomalacia, aka permanent brain damage on both sides of his brain, according to USA Today. It can cause rigidity in his muscles, delayed physical milestones, lack of fluidity with arm and leg movements, stiffness in joints, weakness in his lower back, and more, plus the possibility of developing cerebral palsy, according to Boston Children's Hospital.

As for Hayes, he's meeting all of his major milestones and is running circles around his mom. The juxtaposition is at the heart of her blog, where she describes what it's like to raise two differently abled kids.

Edmonds started off by saying she just finished a 3-week intensive therapy session for Hart and is now in New Orleans so he can receive hyperbaric oxygen therapy for a full month. In case you didn't know already, hyperbaric oxygen therapy can potentially increase oxygen levels in the blood to help fight off bacteria and stimulate the release of substances called growth factors and stem cells, according to The Mayo Clinic.

Science aside, spending time in New Orleans has given Edmonds the time to reflect on the differences between her sons, an exercise that led her to some major realizations. She noticed she'll go on and on about Hart and his achievements, almost as if she's reassuring herself that everything will be alright. And with Hayes, she'll barely touch on his achievements because they're expected given he doesn't have Hart's condition.

And, at times, she feels like two different moms — Hayes' mom and Hart's mom. "To really boil it down I feel like I have an angel and a devil on my shoulder when looking at the other child through my mom lens," she wrote.

Edmonds also admitted to having different perspectives on her kids, going in to detail about how she would view Hart if she was exclusively Hayes' mom, and vice versa.

"Hopefully that Hart boy walks soon," she wrote, imitating what she think "Hayes' mom" would say about Hart and herself. "I can see the way it just tears his mom up to look at Hayes but she needs to realize that Hayes is just so advanced! My boy is a stud and can even keep up with his big sister. Anywho, I’m grabbing coffee with the other moms – that 'Hart’s Mom' lady just gives me the weird judgey eye like she’s so jealous!"

Edmonds' revealed she wrote the post so she could "expunge some shameful thoughts," but to me, there's nothing wrong with her post. I can't imagine what it's like to raise twins, let alone twins with different abilities, and it's great to see her processing the feelings that come along with this monumental task. It's actually healthy, in my opinion.

Here's to Edmonds figuring this all out, one step at a time. Although she feels overwhelmed at the moment, she might find some comfort in knowing RHOC fans are cheering her and her kids on. With a mom like Edmonds, they're both bound to flourish.