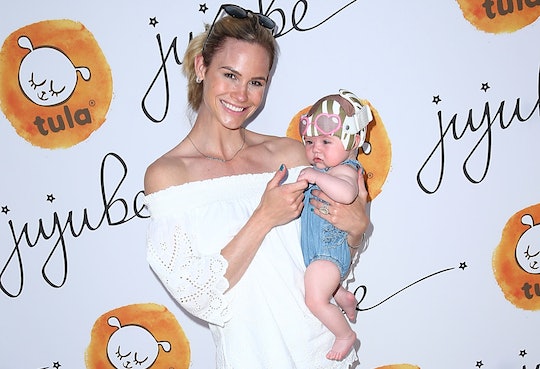 Meghan King Edmonds' Daughter Accidentally Called 911, & So Many Parents Have Been There

If you're having a rough parenting day, here's something that will make you feel a little better. We all know that nobody's perfect, but when it comes to celebrities — especially celebrity moms — it can be hard to remember that. But stars have parenting fails just like the rest of us, and the latest example is kind of hilarious: Meghan King Edmonds' daughter accidentally called 911 on Tuesday, according to Us Weekly, just in case you were wondering if that ever actually happens in real life.

After Edmonds successfully pulled off a tandem feed last week (nursing both twins at the same time), some moms might have been feeling jealous of the former Real Housewives of Orange County star, but just like all the regular moms you know, the highlights she shares on social media are only part of the picture. Leave it to Dad to blow up her spot, though. Former professional baseball player Jim Edmonds posted an Instagram Story showing side by side photos of 19-month-old Aspen holding a cordless phone, and another shot of the screen, with the emergency number showing. "Police at the door at 730," he captioned the pics. "How is it possible for her to hit these numbers perfectly???"

The real takeaway, of course, is that the Edmonds family still has a cordless phone, like it's 1992 up in their house. Dude, why? They're on Instagram, so we know they have smartphones. And I get that some people like to keep a landline for emergencies, but if the power goes out, your mobile phone is still good for as long as you have a charge. A cordless phone is instantly useless! You're paying for service on that thing when all it's good for is receiving robocalls from telemarketers, and apparently summoning the cops to your house because your baby got a hold of it.

Now the real question is, did Aspen know what she was doing? Did her parents teach her to call 911 in an emergency at the ripe old age of one? Because to be honest, I don't think I even thought of teaching my kid until he was around 4, and many years later, I'm still not 100 percent confident he could figure out how to unlock my phone in the first place (mental note: maybe don't lock the phone anymore). It's probably more likely that Aspen stumbled across the number by coincidence, holding the phone in two hands and accidentally mashing the buttons on the edges. At least, that's what I'm going to tell myself.

And just in case you're starting to feel smug because your precious little genius has never SWATted you, believe me, it's all too common. One mom created an informal poll on BabyCenter after her daughter called 911 while attempting to reach Daddy at work while Mommy was making dinner. In response to the question, "Has your child ever accidentally called 911," 156 respondents selected yes, 82 said no, and 136 chose "not yet." So yeah, that's technically a no as well, but remember, it's BabyCenter, not ToddlerCenter, so it's fair to assume that a lot of the kids in question literally can't even hold a phone yet. Those parents could have said no if they wanted to, but they're fully aware that it's not out of the question.

We all know that it's not ideal to leave phones lying around where a toddler can get to them, but this is the real world, and sh*t happens, so let's talk about recovering after the deed is done, rather than prevention. If an emergency dispatch operator receives a hangup or otherwise uncommunicative 911 call, the standard procedure is to err on the side of caution and send the police to make sure everything's OK, so if your baby ever pulls an Aspen, stay on the line and explain what happened. It's a little embarrassing, sure, but not as embarrassing as five squad cars pulling up in your driveway. They may still send a cop just in case, but at least you'll be expecting them. And when you're the parent of a toddler, knowing what to expect is a rare, welcome occurrence.