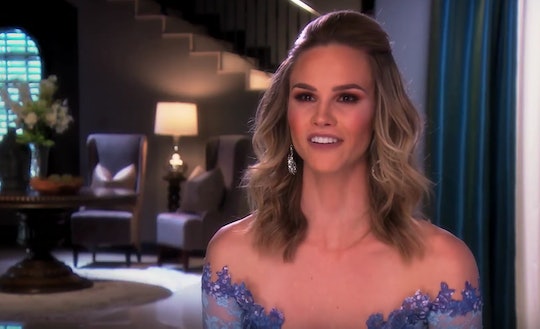 Meghan King Edmonds' honesty on her blog is so admirable. The former Real Housewives of Orange County star has opened up about her relationship and her 1-year-old son's diagnosis with irreversible brain damage, which has brought her fans closer to her than before. So, those same fans will like to hear that Meghan King Edmonds opened up about her son's brain damage in a brand new interview, and it's so important to hear. No matter what happens, she is not giving up hope, and that is so admirable.

Edmonds is used to opening up and being honest about all aspects of her life, especially during her time as a cast member on Bravo's Real Housewives of Orange County. But since leaving the show in 2018, the mom of three to 2-year-old daughter, Aspen, and 1-year-old twin sons, Hart and Hayes, has continued with her streak of honesty, taking to her blog to let fans in on her life. Earlier this month, Edmonds wrote on her blog about a new part of her life she is learning to cope with — her 1-year-old son, Hart, has "irreversible brain damage", or Periventricular Leukomalacia, on both sides of his brain.

In an interview with the Daily Mail earlier this week, Edmonds said that she is remaining positive about her son's diagnosis, especially since he "looks very normal to a regular person." "His brain damage is not progressive," she said. "We don't know yet how it will affect the rest of his life, like speaking in sentences or his physical abilities."

Periventricular Leukomalacia, or PVL, is the softening of white brain tissue, and occurs when brain tissue has been injured or died, according to Cedars-Sinai. PVL can affect the motor skills of infants, causes problems with motor control, and gives infants a higher risk for cerebral palsy. While there is no specific cure for PVL, children might need additional treatments in physical therapy, occupational therapy, or speech therapy, according to Children's Hospital of Philadelphia. So, it makes sense why Edmonds is taking her son's diagnosis day by day, especially since she has no idea how it will impact him in the long run.

Edmonds told the Daily Mail that by giving her son treatments now, she hopes that it will help him in the long run. "I'm just hoping that all the early intervention stuff we're doing now is going to help him and by kindergarten he won't be doing any more therapy at all. He will essentially have grown out of his diagnoses," she said.

It's imperative to note that PVL is pretty rare, according to the Department of Health and Human Services, so it's awesome that Edmonds is so willing to talk about this. The more she is willing to talk about it, the more that other mothers, who have been through the same thing with their own children, will feel less alone.

Although there is so much going on in her life, Edmonds told Page Six on Tuesday that she has committed all of her time to taking care of her family, especially Hart. She said that she has shut down all of her business ventures for the time being so she can care for her kids and take her son to his doctor's appointments.

"My kids and my family are everything to me," she said. "I'm just focusing on the things that matter."

Her devotion to her family, as well as her willingness to open up about her son's diagnosis is so admirable. After sharing Hart's story in the beginning of July, fans are invested in what she has to say about him and his journey. This newest update about him is no exception to that.