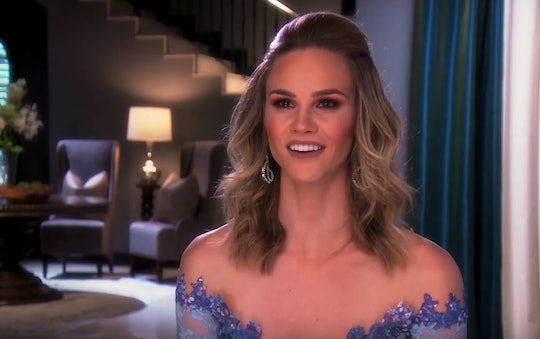 Real Housewives of Orange County's Meghan King Edmonds has long been open and honest about her life, her struggles, and her hardships. And on Friday, the mom of three shared a difficult update with her fans regarding her 13-month-old son's health. In a heartbreaking blog post, King Edmonds wrote about her son Hart's brain injury and detailed how they discovered his irreversible condition.

King Edmonds is mom to three children, 2-year-old daughter Aspen and 1-year-old twin sons, Hart and Hayes, with her husband, former baseball player, Jim Edmonds, according to People. King Edmonds gave birth to her twin boys in June 2018, according to People, and as she wrote in her blog, published on Thursday, she quickly noticed that something was "different" with Hart the "minute he was born."

"The nurses struggled to straighten his legs to measure his length," she wrote. "He suckled hard, shallow, and often until I bled and he split up black."

After begging doctors to do tests on her son, Hart was eventually diagnosed with minor Periventricular Leukomalacia, or PVL — irreversible brain damage — on both sides of his brain.

PVL is characterized by "the death of white matter" inside of the brain due to the softening of brain tissue, according to the National Institute of Neurological Disorders and Stroke. PVL mainly affects newborn, premature babies, and is caused by a lack of oxygen to the brain, which, in turn, causes the death of brain tissue.

The symptoms of PVL vary from child to child, according to Cedars-Sinai, but the most common symptom is tight, contracted muscles. Children who have PVL are able to live normal lives with some developmental delays, but since there is no cure for it, according to Cedars-Sinai, children should be monitored and attend speech therapy or physical therapy to help with their symptoms. As King Edmonds wrote in her blog, it's possible that Hart could be diagnosed for Cerebral Palsy one day.

Although any parent would be devastated to learn that their child has irreversible brain damage and will be affected by it for the rest of their lives, King Edmonds wrote in her blog that she sees this challenge as a blessing. "I will go on about this at another time but just know that I do not see his diagnosis as anything but a gift: we were chosen to take on this special person," she wrote. "I truly feel as if we've doubled down and won the underdog hand. Truly." She added, "God, you're talking to me. I hear you. Let's do this. All of it."

King Edmonds wrote in her blog that her son's diagnosis is the start of a new journey for her, which she will figure out with "one foot in front of the other." And, luckily, she has her friends, family, and countless fans and followers by her side as she learns to navigate her life and new normal with Hart's diagnosis.