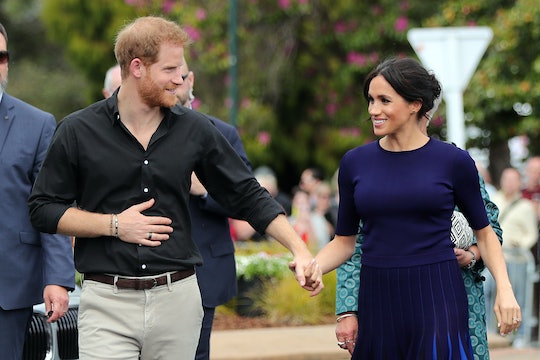 Though it can be easy to assume that members of the royal family just attend press conferences and wave at their loving subjects all day long, they actually have many duties and obligations to attend to, mostly involving the welfare and development of the nation. For her part, Meghan Markle has announced the causes she'll be supporting as a working royal, and they seem pretty awesome and perfect for her.

Though Markle is set to deliver her first child sometime this spring, she will be returning from maternity leave to continue her work as the Duchess of Sussex. Entertainment Weekly reported that the issues she will be focusing on are the arts, women, education and animals, which are all issues that she has previously expressed interest in or passion about (particularly acting, because, hello).

Specifically, the Duchess has officially become the patron of four different organizations, Kensington Palace announced on Thursday morning. They are The National Theatre, The Association of Commonwealth Universities, Mayhew, which works to “improve the lives of animals and people to better communities both in London and internationally," and Smart Works, which "helps long-term unemployed and vulnerable women regain the skills, confidence and tools to succeed at job interviews, return to employment and transform their lives.”

For those who aren't familiar with the royal lingo, a "patronage" is an organization to which a member of the royal family pledges to support and publicly advocate for.

"Members of the Royal Family have links with hundreds of charities, military associations, professional bodies and public service organizations. Some are well known, while others may be smaller bodies working in a very specialist area or on a local basis only," according to The Royal Household. "Having a Royal patron or president provides vital publicity for the work of these organizations, and allows their enormous achievements and contributions to society to be recognized."

The site went on to explain that patronages are typically chosen based on any given family member's personal interests, and that, given how many thousands of requests the family gets for support, they unfortunately have to limit their responsibilities to just a handful of organizations, though many are likely deserving.

Since she first got engaged to Prince Harry, Markle has been outspoken about how much she is looking forward to being able to work on causes that are "important" to her.

In an interview with the BBC after their engagement, Markle shared: "I think what's been really exciting as we talk about the transition of this out of my career but into the role is that as you said the causes that have been very important to me, I can focus even more energy on. Because very early out of the gate I think you realize once you have access or a voice that people are willing to listen to with that comes a lot of responsibility, which I take seriously."

It's clear that after just a few months of marriage, Markle is showing her commitment to doing just that... and being true to herself in the process. What could be more inspiring?