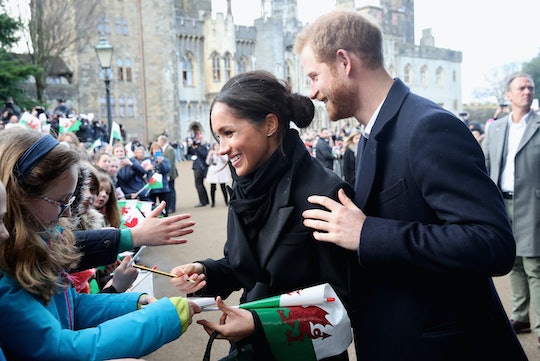 Meghan Markle Broke A Royal Protocol For The Best Reason Ever

The news that Meghan Markle, a U.N. Women's Ambassador and outspoken feminist, plans to give up her career and her country to marry Prince Harry struck some fans as rather disappointing. But there may not be a reason to worry, after all, because she's already flouting tradition left and right, and it could be a sign that she'll continue to shake things up across the pond. Meghan Markle broke a royal protocol during a meet and greet with fans in Wales on Thursday, and it's all because a little girl asked her nicely.

Royals are supposed to decline to sign autographs, but when 10-year-old Caitlin Clark asked the future "Her Royal Highness Princess Henry of Wales" for her signature, she indulged the child, according to People, writing "Hi Kaitlin," and drawing a heart and a smiley face. Clark told reporters that she didn't mind that her name was misspelled, saying, "My heart is still racing. I've never got a royal autograph before. This is going to make everyone jealous." You're darn right, they'll be jealous; almost nobody has a royal autograph. Of course, Markle's been a working actor for more than 15 years, so it's likely that Clark isn't the only person who's convinced her to sign something, but it's nearly unheard of in Prince Harry's family.

According to the Daily Express, royals are forbidden from signing autographs because of the risk of their signatures being forged, and Markle's future father-in-law (and future king) Prince Charles generally tells autograph seekers, "Sorry, they don't allow me to do that," although he did once break tradition for a flood victim in 2010. But who exactly are "they," and why do they have so many arcane rules governing the etiquette of one family of figureheads? And does Markle really need to follow them?

Judging by her history, she's not about to succumb to a Little Mermaid scenario and give up her identity for a man. During that same visit on Thursday, she and Harry met with children benefiting from the UsGirls project, an organization that promotes girls' inclusion in sports. Markle also proudly told one well-wisher in the crowd that not only is she a feminist, so is her fiancé, according to the Telegraph. It seems empowering girls and women will always come first for Markle, whether it's through her charity and outreach work, or just something as simple as a note to a little girl, assuring her that she's worthy of kindness and attention from even the most important people, regardless of stuffy protocol.

Aside from the arguably silly royal rules, some are downright oppressive, and fans hope Markle will buck those, as well. Legally, Harry has to get his grandmother's permission to marry her, thanks to the 1772 Royal Marriages Act, created by King George III, whose brother had the audacity to marry a "disreputable" woman with "bewitching eyes," according to the BBC. And up until 2015, it was illegal for royals to marry Catholics. But the most irritating rule Markle's likely to bump up against is the one prohibiting royals from voting or even voicing their opinion about anything remotely political.

The tricky part about these guidelines is that while some are actual laws (which can be struck down by Parliament, as the Catholic prohibition was), most are just rules that are followed simply for the sake of tradition. The British constitution is unwritten and uncodified, and most of what we think of as "laws" or "rules" are actually just conventions that can't technically be enforced. Legally, the Queen is still in charge over there, meaning she could assert her power to enact laws or even appoint a new Prime Minister, but she doesn't, because it's simply not done. But since the Queen is still the boss of that family, perhaps Markle will take her own advice, which she shared on Nick News at the tender age of 11: "If you see something you don't like or [you're] offended by — on television or any other place — write letters and send them to the right people, and you can really make a difference, for not just yourself, but for lots of other people." Get on it, girl!