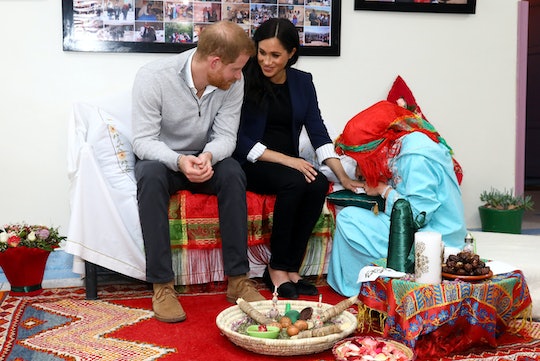 Meghan Markle is about seven months pregnant and her business trips are likely a little more *involved* than yours, given the distance she's traveling (but she also has that whole being a member of the royal family thing that you don't have access to, so...). Markle and husband Prince Harry traveled to Morocco as part of a short royal tour, the couple's last scheduled trip together before Markle gives birth to baby Sussex. They've visited charities and toured a girls' boarding house located in the Atlas Mountains. While at the boarding house, Meghan Markle got a henna tattoo with the sweetest meaning while on a royal visit to Morocco as Prince Harry sat by her side — and the moment echoed one from Kate Middleton's pregnancy with Prince Louis.

As the Mirror reported, the Duke and Duchess of Sussex traveled to the Moroccan town of Asni, located in the Atlas Mountains, in order to make a visit to a boarding house. While they were there, a 17-year-old resident of the boarding house gave the duchess a henna tattoo that was meant to bring good luck to the pregnancy and the baby.

Meghan's henna tattoo, located on her forearm, hand, and finger came in the shape of several sweet flowers. She reportedly dubbed it "really lovely," as the Mirror noted.

As Hello! magazine noted, Meghan's sister-in-law Kate Middleton, the Duchess of Cambridge, also received a henna tattoo while pregnant. The outlet reported that Kate was seven months pregnant with Prince Louis when she received a flower-themed henna tattoo while at the opening of a new artist's residence in the UK.

Henna ceremonies are a tradition for Moroccan women during their pregnancy, according to the Mirror. According to reporting, both Kate and Meghan complimented their artists after receiving their tattoos.

Natural henna is generally safe to use during pregnancy, according to Baby Center UK, because the dye doesn't include any added chemicals. Still, it's a good idea to verify, if you can, what sorts of things the pigments might be mixed with to make sure that all is well. The use of black henna, however, is not OK because it contains an additive called para-phenylendiamine, or PPD, which can skin blistering and other adverse reactions, as per the American Pregnancy Association.

The Duke and Duchess of Sussex will wrap up their royal duties on Monday afternoon and then reportedly enjoy a last night in Morocco, returning home to London on Tuesday, as People noted. Harper's Bazaar reported that royal sources told the outlet that "medical provisions have been made" for Meghan while she's traveling.

The royal couple has a busy few months ahead of them before baby Sussex makes its arrival. Harry and Meghan are gearing up to move from the grounds of Kensington Palace to their new home at Frogmore Cottage, in Windsor. The Duke and Duchess of Sussex will reportedly move to Windsor in March, as ITV reported, so that they have a bit of time to settle into their new living situation before the baby appears on the scene.

As nearly everyone knows, moving is a big life change and a total hassle, even if you're not seven or eight months pregnant, so even if Meghan were to have literally nothing else on her schedule before her due date (which is pretty unlikely), things would still be pretty hectic. It's nice that Meghan and Harry will have a bit of time (or, at least, should have a bit of time) to unpack and prepare before their baby arrives. After all, there's not much time left for them as a family of two, so here's hoping these parents-to-be get to enjoy every moment of it.

More Like This
Can You Bowl While Pregnant? Experts Weigh In
Tom Hiddleston & Zawe Ashton Are Expecting Their First Child Together
Pitocin Induction: What It Is & The Play-By-Play
I Found Gender Euphoria In My Second Pregnancy