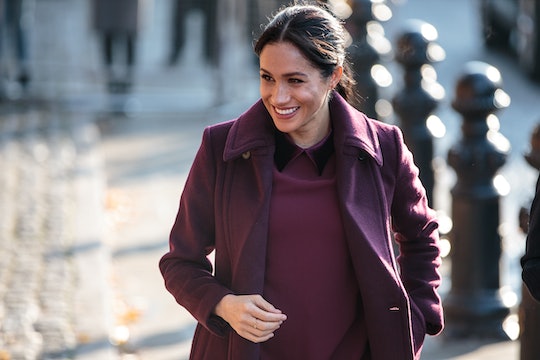 It hasn't even been a year since Meghan Markle married the United Kingdom's Prince Harry and she has already been honored in so many different ways. People really love the Duchess of Sussex, like, a lot. And this was pretty much proven this week, thanks to this new (and unique) tribute. People might be surprised to find out that Meghan Markle has a flower named after her, but the flower is gorgeous and the meaning behind it is just as pretty.

Markle is lovely like a flower, literally. This week, the Royal Horticultural Society announced that they had named a flower after Markle, according to People, who is currently expecting her first child with her husband. The flower is so pretty, as people would expect, and is definitely reminiscent of Markle.

The flower is a purple-pink clematis flower, known as the clematis Meghan. But unlike Markle, who blooms all the time with her gorgeous smile and super sweet personality, this clematis only blooms two times a year. The Royal Horticultural Society elaborated on their website:

Named after the most recent addition to the royal family (and Prince Harry's wife), "Meghan" is an exquisite new large flowering clematis that will usually offer two flowering seasons each year — the first being the most prolific in early summer (around the time of their wedding), but then again in early autumn.

Sounds just as exquisite as Markle herself. And the photos of the flower prove it really is that pretty.

Luckily, getting a glimpse at the flower might be easier than seeing the Duchess herself. The clematis Meghan will debut at the Chelsea Flower Show in May, according to Town & Country (which has been an event frequented by the royal family in the past). But, those who can't wait until then (which is around the time that Markle is reportedly due with her first child, according to Cosmopolitan), can buy the flower (which is a climbing flower) on the Royal Horticultural Society's website.

It's unclear why the Royal Horticultural Society chose this specific clematis to name after Markle. But, there is a lot of beauty behind the symbolism of the clematis flower. Clematis symbolize ingenuity, or the quality of being clever and original, according to Hunker. It also symbolizes "mental beauty" — all of which perfectly describes Markle, who is not only known for her beauty, but her compelling speeches and compassion for other people. If that is not a great interpretation of mental beauty, I don't know what else is.

Who knows? Maybe the name that Markle and Prince Harry choose for their baby will be flower inspired.