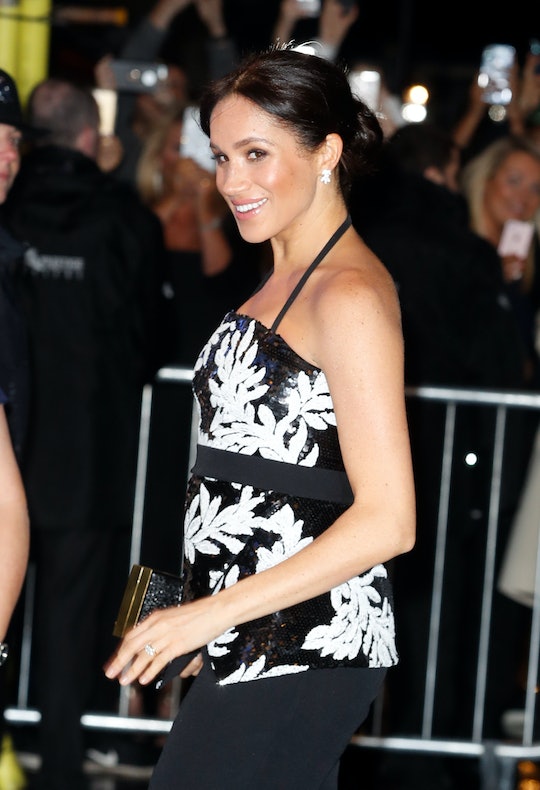 Since Kensington Palace broke the news of an upcoming royal baby, glimpses of Prince Harry and his wife have been somewhat scarce. Aside from paparazzi photos and a few public appearances, fans haven't seen much of the expectant parents. But Meghan Markle and her adorable growing bump made a surprise appearance on Monday night and looked so stunning. And as you'd expect, people can't stop talking about it.

Markle was on the scene at The Fashion Awards in London, presenting an award to her friend Clare Waight Keller. Keller, who you might remember designed Markle's wedding dress, is the artistic director of Givenchy and was named British Womenswear Designer of the Year, according to Cosmopolitan. "It is such an honor to be here celebrating British fashion and British fashion designers in my new home of the U.K.," the Duchess of Sussex said on stage.

And while Markle's focus was on Keller and the honor she was there to bestow, fans of the royal family were captivated by Markle's growing bump. Markle's silk Givenchy gown accentuated her belly, and she did little to divert attention as she cradled her bump on stage. The mom-to-be's changing body has been the subject of quite a bit of speculation lately as fans and the media question if she's having a single baby or twins. One thing is clear, Markle is already in love with her bundle of joy.

Markle continued her speech, according to Town & Country, explaining the important role that fashion plays in people's lives:

As all of you in the room know, we have a deep connection to what we wear, sometimes it's very personal and sometimes it's emotional. But for me, this connection is rooted in, really, being able to understand that it's about supporting and empowering each other, especially as women.

Markle's willingness to act in an official capacity for the awards is not all that surprising, considering her desire to continue working during her pregnancy. Vanity Fair reported that Markle told her aides that her plans are to "work as close to her due date next spring as possible."

Kensington Palace first announced Markle's pregnancy with a tweet on Oct. 15, "Their Royal Highnesses The Duke and Duchess of Sussex are very pleased to announce that The Duchess of Sussex is expecting a baby in the Spring of 2019," the announcement stated. "Their Royal Highnesses have appreciated all of the support they have received from people around the world since their wedding in May and are delighted to be able to share this happy news with the public."

There haven't been many official updates since then, and the public has filled in the blanks with guesses. A popular rumor circulating is that the Duchess is carrying twins. The Daily Mail reported that the popular British betting website Paddy Power had to shut down bets concerning royal twins, after receiving so many bids on Friday. These bets led some to believe that an inside source was the first to place such a bet.

Markle's appearance at The Fashion Awards did little to squash the rumors. People have been quick to draw conclusions based on the size of her bump, and while Everyday reported that a bigger belly can mean twins, it's doesn't always. Some women simply show more than others. Until Markle or Kensington Palace confirms that there are two royal babies on the way, calling her bump "huge" borders on bump-shaming.

Although fans may have been thrilled to see Markle's belly more so than the Duchess herself, Keller was just glad to see her friend at all. "I got to know Meghan on such a personal level, and to have someone like that trust you in an incredible moment in their life, is something that is just the most unbelievable honor," she said when accepting her award. "And I cannot thank you enough, because it was just the most beautiful thing. Thank you."

Twin theories aside, Markle's presence on stage was beyond captivating and she looked amazing, as always. She was glowing, to say the least.