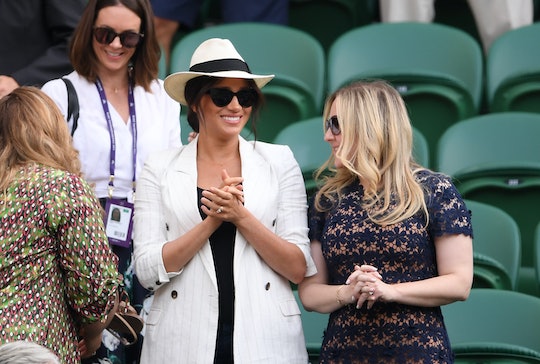 Meghan Markle made a surprise appearance at Wimbledon on Thursday, July 4. The Duchess of Sussex took a day off from maternity leave to cheer on her friend, Serena Williams, and watch some tennis. And while she attended the tournament without her sweet little family in tow, Meghan Markle did honor her son Archie in the most stunning and subtle way that anyone can easily recreate.

Markle attended the tennis tournament in the United Kingdom on Thursday to watch Williams claim victory during her match with tennis player, Kaja Juvan, according to CNN. Markle wasn't there to root on Williams alone, though; two of her closest friends from college, Genevieve Hillis and Lindsay Roth were by her side the whole day, according to Cosmopolitan. Needless to say, it was a very friend focused day for Markle and her gal pals.

But this meant she had to leave two of her favorite guys at home — her husband, Prince Harry, and their son, Archie. While Markle got to take a break from getting ready for Archie's christening on Saturday, it's unclear what Prince Harry and Archie were doing in the meantime. But that isn't to say that they weren't on her mind. Markle wore the most simple "A" charm necklace, which was a presumable nod to the "A" in her life, Archie, according to InStyle.

Although her little boy couldn't be with her during the tournament, she was still able to bring him in a super small way. The super dainty piece can be seen on Markle's neck in this photo (although you might have to squint to find it).

This is a sweet and thoughtful fashion decision that anyone can recreate. Moms who want to carry their kids with them (without them physically being there) can take a cue from the Duchess of Sussex and buy their own charm necklaces with their kid's initials attached to it. The best thing? You don't need the bank account of a royal to afford one.

Amazon Prime shoppers will love this budget-friendly initial necklace, available to purchase on the website for only $13.99. Those who want to support independent designers will love this 14 karat gold option from Etsy. And those who like a little more pizazz will appreciate this cubic zirconia initial necklace for just $45 from Nordstrom. There are so many options for anyone to perfectly pay tribute to the special people in their lives, just like Markle did this week.

Markle loves her jewelry just as much as she loves attending Wimbledon. She has recently been seen sporting a brand new eternity band (in addition to her engagement ring) which was reportedly designed by Prince Harry himself, according to Town & Country. Prince Harry reportedly designed the eternity band with designer, Lorraine Schwartz, in honor of Archie's birth and their one year wedding anniversary. The band reportedly also has Prince Harry and Archie's birthstones located in the underside of it, according to Harper's Bazaar, which is pretty much the most touching thing ever.

When Markle makes her official return from maternity leave some time later this summer, she'll be making plenty of trips without her son. Luckily, thanks to her stylish and sentimental accessories, Markle will be able to take her son with her wherever she goes.