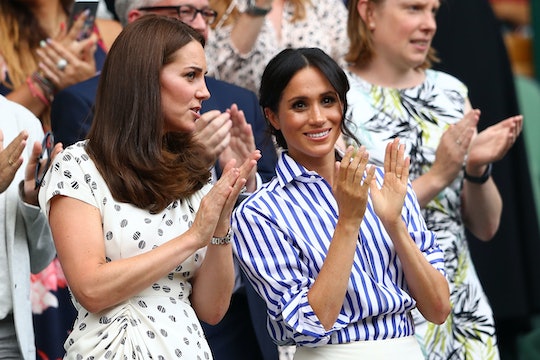 Although being a duchess may seem like it would be an actual dream job full of palaces and tiaras and strangers curtseying to you wherever you go, it's likely much more stressful than anyone realizes. For one, it means you pretty much always have to look perfect — even hours after you've just given birth — and since any embarrassing missteps will likely be broadcast around the world, it's no surprise that the royals have to plan their outfits carefully. In turns out that Meghan Markle and Kate Middleton avoid wardrobe malfunctions on windy days with this dress hack, and honestly, it's a pretty genius idea.

Both Meghan and Kate often wear dresses or skirts when making royal appearances, and though they always manage to look totally flawless, the reality is that the weather doesn't always cooperate with their sartorial choices. And since the last thing any woman wants is to have her skirt fly up in front of waiting cameras, the royals have to come prepared. In a recent interview with The Sun, etiquette expert Myka Meier said that the duchesses will actually try to choose undergarments that encourage static cling, making it more likely that their dresses will stay connected to their bodies while they're out in public. And when they're going to be photographed in a particularly windy location, like on the tarmac at an airport? The royals will specifically aim for heavier fabrics to lessen the likelihood of an unexpected mishap.

The good news for Meghan at least? The newly-minuted Duchess of Sussex is probably learning at least a few valuable tips from her sister-in-law, who has definitely had a few close calls with her outfits on windy days. In July 2011, for example, while on her first-ever royal tour just three months after her wedding to Prince William, the duchess seriously struggled with her yellow Jenny Packham shift dress while on a windy Canadian airport runway, according to E! News, and while pregnant with Prince George in April 2013, her polkadot Topshop dress also threatened to betray her in front of the cameras.

What's more? In 2014, cameras even captured photos of what appeared to be Catherine's bare behind after a gust of wind blew her dress up while on a royal tour to Australia (though the British press refrained from publishing the photos, they did still end up running in a German newspaper, according to US Weekly.)

Of course, if there's anyone who certainly already knows a thing or two about avoiding wardrobe malfunctions in public, it's the Queen herself. And after more than six decades on the throne, it's probably not surprising to learn that she relies on a strategy that is more reliable than just static electricity: according to The Daily Mail, Queen Elizabeth II has "small lead curtain weights" sewn into the hems of her outfits to ensure they're no match for the wind. The Queen's dressmaker, Stuart Parvin, told the outlet,

I just pop a couple into the hemline of her dresses and coats and it makes them hang beautifully. If there is a flap in the coat then I will sew in one on each side of the split to even it up. And sometimes if she is wearing a lightweight chiffon skirt I will sew in an even smaller lead weight the size of a pea or even a length of chain, rather like a dog’s chain. But the curtain weights work beautifully.

It's a lesson that designer Jenny Packham herself says she learned the hard way after witnessing Catherine's yellow dress fiasco. Packham told The London Evening-Standard in 2012 that although she "didn’t know it was going to be worn on a windy runway," the experience did lead her to decide to "put in more weighting" in the duchess' dresses in the future, just to be safe.

One other Queen-approved styling trick Meghan may also want to adopt as she gears up for her own royal tour to Australia and New Zealand with Prince Harry later this year? Wearing hats. Myka told The Sun that royal women often opt to wear a hat when they are photographed walking off of a plane, because it means that their hair will be kept in place for the all-important first photo.

Honestly, I can't say that I've ever given much thought at all to wind-proofing my dresses, but then again, I'm not a duchess. What is in all likelihood just a slight annoyance for most women can turn into headline-making news when being photographed looking polished and poised is such a huge part of your job. So it makes total sense that Meghan, Catherine, and their respective glam squads probably want to ensure they have some solid tricks up their sleeves.