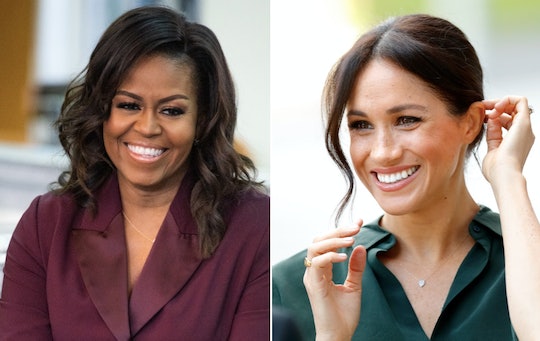 Although it won't be in person, Meghan Markle and Michelle Obama will reunite once again. Later this month, the Duchess of Sussex and former first lady will both speak at the 2020 Girl Up Leadership Summit, a virtual conference held from July 13 through July 15 to inspire young women "to be a force for gender equality and social change."

Girl Up announced on Tuesday that Markle will be offering her advice to "global girls leaders" during this year's summit. "The present is female! But don’t take our word for it. Hear Meghan Markle, The Duchess of Sussex’s advice for global girls leaders when she takes the stage at the 2020 @GirlUp Leadership Summit," the organization tweeted.

Obama will also be on hand to deliver a "special message." Facebook COO Sheryl Sandberg, along with Markle's friend, Priyanka Chopra, and others will also speak during the summit.

And the best news? Anyone can attend the conference for free. Tickets are still available for both youth attendees and adult advocates interested in attending. All you need to do is register online and devote three days to learning and listening.

Markle and Obama met for the first time in 2018 when the Duchess of Sussex attended an event in London for Obama's memoir, Becoming, according to Good Morning America. Since then, Markle interviewed Obama for the September 2019 issue of British Vogue. "There's something magical about the way in which she draws you in with her endearingly frank personality," Markle wrote of Obama for the magazine.

When it comes to delivering a message of empowerment to young girls, Markle and Obama are perfect for the gig. Beyond her impressive career and life, Obama is also the founder of the Girls Opportunity Alliance, a program that seeks to empower young girls through education and community programs.

As for Markle, she was just 11 years old when she wrote to Procter & Gamble about a dish soap ad that was only directed at women, according to People. The company listened and changed the ad. And in 2015, Markle delivered a moving speech at the UN Women's Conference where she encouraged young women to "stand up for what's right." "In doing this, we remind girls that their small voices are, in fact, not small, and they can effect change," she said. "In doing this we remind women that their involvement matters. They need to become active in their communities, in their local governments, as well as in the highest parliamentary positions."

It's possible her speech at the 2020 Girl Up Summit will be just as inspiring and memorable. But even if you aren't able to attend the 2020 Girl Up Leadership Summit as it happens, all of the Virtual Summit live content will be available on demand after the sessions end, so you can get your Meghan Markle and Michelle Obama doses of inspiration whenever you need.