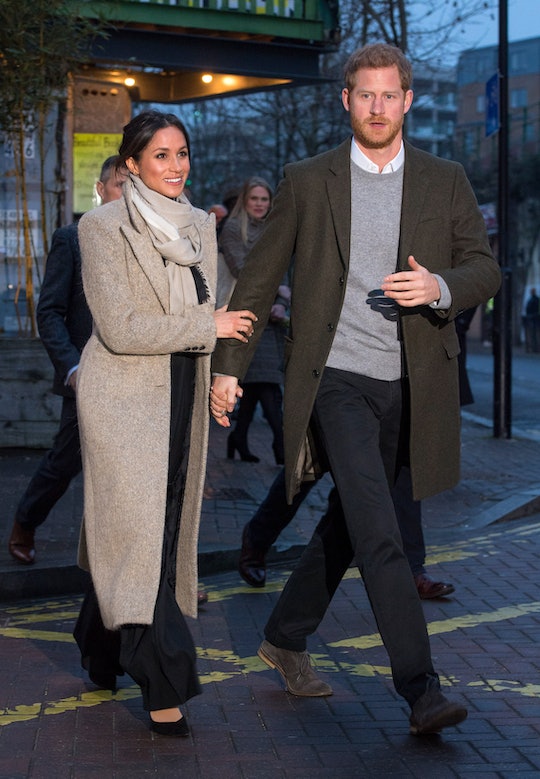 Three members of the royal family walk into a pub. Although it may sound like the beginnings of a joke, it was in fact the makings of an adorable afternoon out for the youngest member of Britain's royal family. Meghan Markle, Prince Harry and Archie recently enjoyed lunch in a local village pub, according to a recent report from The Sun, and though the Sussexes haven't commented on the reports, can you just imagine sitting next them with a frosty pint in hand?

Baby Archie, who will turn 4 months old on Sept. 6, was reportedly spotted with his parents and a small security team at The Rose & Crown pub in Winkfield village, Berkshire on Sunday, according to The Sun, which reported that fellow diners said the young royal was an ideal lunch date. "They were on a table with, I presume, a private secretary," an unnamed businessman told the paper about the family of three. "Meghan was cradling Archie most of the time. The little lad was as good as gold, I didn't hear him cry once while he was there."

In a statement to Yahoo UK, however, the Rose & Crown pub denied reports the family of three had dined there for lunch. Meanwhile, The Sun reported that staff at the pub, according to the businessman, "clearly knew who they were but kept the service low-key," adding that The Rose & Crown pub staff indicated to him that the family had been there before.

According to Google Maps, the pub is located less than six miles from Windsor Castle's Frogmore Cottage, where the royal family currently resides. Advertised as "quality, fresh, and locally sourced dining," The Rose & Crown says it prides itself on offering "everything a great British pub should," making it the perfect neighborhood eatery for Prince Harry, Markle, and baby Archie.

Although it specializes in "traditional British food with a delicious continental twist," The Rose & Crown also offers diners "a warm welcome, delicious food, real ales, a beer garden or an open fire (depending on the good old British weather), a classy wine selection," and even, its own ghost.

While Markle was said to have stuck to water, Prince Harry reportedly tossed back a couple of pints of beer with his lunch, People magazine reported. However, there's been no word on whether the royal family have spotted the pub's paranormal patron.

But ghost sighting or no, the family of three was reported to be enjoying their midday meal and being out of the spotlight, according to reports. "They just chatted away like any normal couple and were laughing a lot," The Sun reported their source said. "After the controversy they have been attracting they were getting their feet back on the ground with pub grub like millions of ordinary folk, and it was nice to see." Of course, it's unclear if the royal family actually dined at The Rose & Crown as the pub denied reports of the meal to Yahoo UK.

Earlier in the month, Markle and Prince Harry found themselves heavily criticized by the British press after it was reported that they'd used a private plane for two family getaways in Europe. The pair, who often speak out about environmental issues such as the importance of combating climate change, were branded "hypocrites" by a number of British media outlets, according to CNN.

Markle, Prince Harry, and baby Archie are expected to spend some time visiting Queen Elizabeth II at Balmoral Castle in Scotland before embarking on a royal tour of Africa, which will be baby Archie's first official royal trip.