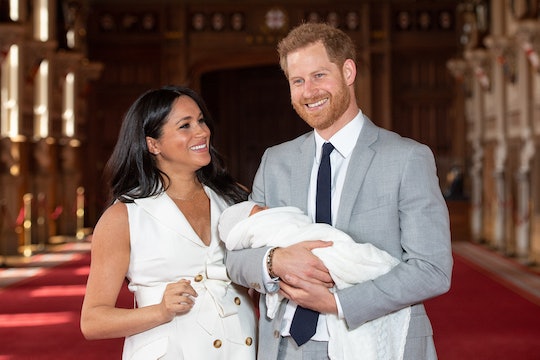 Just because the Duke and Duchess of Sussex have moved on from their royal duties doesn't mean their work is finished. In fact, a new charitable foundation is in the works and Meghan Markle and Prince Harry revealed that Archie's name has a very special connection to it.

The foundation, which has not officially launched yet, will be called Archewell, which sounds a lot like Archie, of course. The Telegraph reportedly obtained paperwork filed by Markle and Prince Harry in the United States that explained that the name for their foundation predates that of their soon to be 1-year-old son, as well as how they decided on a name.

"Like you, our focus is on supporting efforts to tackle the global COVID-19 pandemic, but faced with this information coming to light, we felt compelled to share the story of how this came to be," Markle and Prince Harry told The Telegraph in a statement. "Before SussexRoyal came the idea of 'arche' — the Greek word meaning 'source of action.'"

"We connected to this concept for the charitable organization we hoped to build one day, and it became the inspiration for our son’s name," the statement continued. "To do something of meaning, to do something that matters. Archewell is a name that combines an ancient word for strength and action, and another that evokes the deep resources we each must draw upon. We look forward to launching Archewell when the time is right."

Archewell remains a work in progress while the couple is hunkered down in Los Angeles following a brief stay in Canada after moving from their home in the United Kingdom. Markle and Prince Harry have not released an official statement regarding where they plan to call home moving forward, but a source who claimed to be close to them reportedly told People that they are at home in California.

No matter which country the former senior royals choose as their home base, they have lots of exciting work ahead of them. As for their nonprofit Archewell, it will reportedly offer a wide range of charitable services that meet the needs of people around them. Both Markle and Prince Harry have a history of philanthropy and are known for their giving hearts. From Prince Harry's passion project, the Invictus Games, that supports wounded veterans to Markle's work in developing countries promoting the education of at-risk girls, the pair has quite the pool of experience to pull from while finalizing plans for their new venture that has a lovely connection to their baby boy.